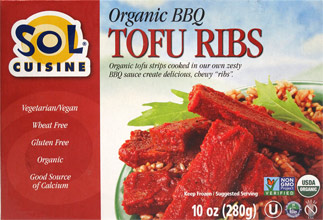 I had my husband stop at the store the other day on his way home. He came with a few things that were not on the list, including two boxes of Sol Cuisine Organic BBQ Tofu Ribs. He bought them because the store had them on clearance. They were regularly priced $4.29, but were on clearance for $2.14. So he thought we would try them out.

Tonight I served them up with some quinoa and veggies. They were delicious! We both really liked them. They have a great texture because the tofu has been frozen. Very good! And they are gluten free, which I also like.

Now here is the problem... we like these BBQ Tofu Ribs, but the store was clearancing them out and will probably no longer carry them. So I am faced with not even knowing where I could buy them again. I can tell you that I will be on the lookout though, because they were tasty!