I have blogged several times before about how PETA actually kills animals. News regarding their 2012 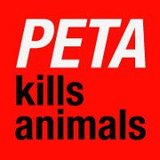 PETA is good at one thing, which is fundraising. They rake in around $30 million per year. They claim to be an animal rights organization, but would an animal rights organization kill thousands of animals per year? They make a lot of money and claim it is to help animals, yet they don't even use it to help the very animals that are at their doorstep.

If you want to support an animal rights group or help save animals think twice before giving your money to PETA. They kill thousands of animals every single year. Animals that they could find homes for and help provide care for, but they don't want to use any part of that $30 million yearly budget to do so. Instead they pay someone to kill all those animals. Consider giving your money to an animal sanctuary, rescue group, no-kill shelter, or an animal rights group that does not kill animals.

PETA kills animals. The proof has been out there for a long time. Many people don't want to believe it, but it is true. Look beyond their marketing tactics, which are successful at bringing in a lot of money, and look to what it is that they do with that money. They are not using it to save thousands of animals they come in contact with each year.

You can read the full news article about PETAs 2012 kill record here.