The Dalai Lama is Not a Vegetarian? Come again... 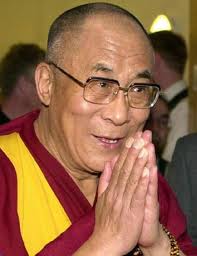 I know the Dalai Lama is one that the world looks up to. I get that. But when the Humane Society of the United States recently launced their international division and held an event to discuss having compassion for animals I think they may have chose the wrong person, the Dalai Lama, to be their featured speaker.

I know what you are thinking... of course he is the right person to speak about compassion, right? That's what I thought as well. Until I read the HSUS blog, where they explain that the Dalai Lama is NOT a vegetarian at this time and has always wavered back and forth in being one. Considering he spoke about having compassion for animals and the fact that a vegetarian diet is the best, it's a little odd that he isn't a vegetarian. But that's what they report! Here's what the HSUS says (highlighting and underlining is mine):

"Today, in his extended public remarks on animal issues, he mentioned that he’s been back and       forth on his vegetarianism through his eight decades, and is not a vegetarian now. But he       condemned factory farming, and specifically the rearing of hens in battery cages. He said that       being vegetarian is better for us and better for animals, and that South Indian vegetarian food is his favorite cuisine."

Surprised? I was too. It's odd for a man who lives his life speaking about compassion and doing a talk on the virtues of a vegetarian diet to, well, not be practicing what he preaches. He's not a vegetarian. Perhaps the HSUS should have gotten someone to speak who is actually living the virtues that he is preaching. It's just a thought...

You can read the HSUS full recap on this event here.