Vegan Sandwiches Save the Day! Review and Interview

Who doesn't love a good sandwich? We have been eating sandwiches since toddlerhood. Perhaps your 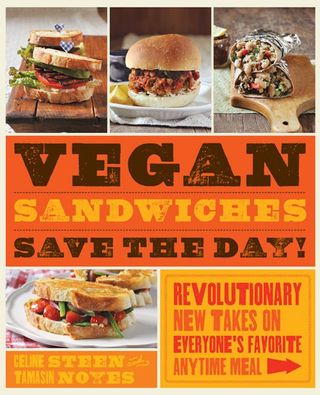 culinary preferances have moved beyond PBJ, but if you are like most people you get in a rut. You don't know what kind of sandwiches to make and you don't want the same old things time and again. Well, there's a new vegan cookbook you will not want to miss!

"Vegan Sandwiches Save the Day" by Celine Steen and Tamasin Noyes is a 191 page cookbook dedicated to... the vegan sandwich! Need I say more? This is way beyond cool! I received a review copy of this cookbook in the mail and was excited. The book looks great, has some color pictures throughout, and has more vegan sandwich ideas than you ever thought were possible.

There are so many that I plan to try, including the "Out for the Count of Monte Cristo," which is a breakfast sandwich bagel that has sauekrat, the "Onion Ring Ranchocado," which features an onion ring, and "Dagwood's Special Sandwich." I have to try that last one simply because it reminds me of my great grandmother, who used to call every high-stacked sandwich a Dagwood.

This book makes a great addition to my vegan cookbook collection. I look forward to making a few lunch sandwiches and having friends over to nosh down on them. Two thumbs up!

After getting this cookbook I wanted to ask the authors a few questions, so here is the Q&A that I did with them (find their Facebook page here):

(TAMI) Where did you get the idea to do a cookbook on vegan sandwiches?
My husband and I were eating a lot of sandwiches one summer, and I realized that there was the potential for a ton of variety. Nobody likes a sandwich rut, so I started coming up with different combos. I figured others might feel the same and it took off from there.
(CELINE) What is your favorite sandwich recipe from this book and why?
My response to this varies constantly because it's hard to pick just one! Currently, the carnitas sandwiches are a favorite here. My husband had been asking me to make them again ever since we finished writing the book, so I finally caved in. Jackfruit isn't my favorite thing to look at and work with, but the results make me forget all of it when it's time to have a big bite, or twelve. I love the way the super flavorful marinated jackfruit pairs up with the spicy crème and the avocado spread/guacamole.
(TAMI) Which sandwich in the cookbook do you think is a favorite for kids?
Probably the Plum-tillas with Vanilla Dipping Sauce. You get to eat with your hands, have a dipping sauce and a sweet plum filling. Although the Peanut Butter Brownie Sandwiches and the Oreo Wafflewiches are right up there, too.
(CELINE)Which one is going to surprise people the most once they take their first bite?
I go on and on about the From Russia With Love every time someone gives me a chance, and I have to talk about that one again. I think that when folks see the sandwich, they won't expect as much awesomeness as their mouth will get. The flavors are unbelievable (think caraway, sauerkraut, marinated tempeh, pumpernickel bread), and the texture is brilliant. Tami truly outdid herself with that one.
(TAMI) If a non-veg friend was stopping by for lunch and I wanted to make her one of these sandwiches, which one would you suggest to impress?
This is a tough one! I guess it depends on how open-minded the friend is. The Asian Eggplant Sandwiches would be my choice for a not-so-vegan-curious friend. It doesn’t scream vegan at the top of its lungs and has a ton of flavor and a perfect crunch. If the friend is vegan-curious, I’d go with the Tempeh Arugula Caesar Wraps. The cashew-based dressing sets off the baked tempeh and arugula salad so well. The sunflower seeds truly put this one over the top.