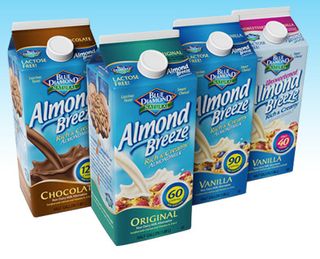 industry. The press release's intent is to get more vegetarians to drink cow's milk. Let's think about this for a moment... why would the dairy industry put out a press release specifically trying to lure vegetarians? Here's a couple of reasons I believe they may be doing this:

1) They realize that vegetarians are leading a crusade against the cow milk industry. If they can try to reach them and convince them that cow milk plays an important role in their diet, then perhaps they can win back some drinkers. Grass roots groups, such as the one I am part of, spend time every month to introduce people to plant-based milks in hopes that they will make the switch.

2) Because they are desperate. The sale of cow's milk is down to the lowest they have been in decades. This news article here reports that, as well as the fact that the milk industry is "looking for ways to boost consumption." Reaching out to vegetarians is one of their attempts to try and hang on to a dying industry.

3) The consumption of non-cow milk's is up, as reported in this news article here. As cow milk consumption declines, the consumption and sales of soy milk, almond milk, hemp milk, coconut milk, and other types of plant-based milk is on the rise.

The dairy industry is clearly desperate to try and gain sales. In the press release, which you can see here, they attempt to convince vegetarians that they need the nutrition from cow's milk. The real kicker here is that they forget who they are talking to. Vegetarians and vegans are a savvy bunch of people who generally know more about food, nutrition, and where it comes from, than do most of the general public does. In other words, we know better!

There are better ways to get nutrition as a vegetarian. As a vegetarian you don't need cow's milk anymore than you need dog milk, horse milk, or the milk from any other animal (beyond breastmilk while you are an infant). Period. Cow's milk comes at a horrible cost to the cow and calve, supports a terrible industry, comes with pus in every glass, is loaded with hormones and antibiotics, harms the environment, and has been believed to be linked to everything from acne and cancer to osteoporosis.

There are a lot of good reasons to not drink cow's milk. Watch movies like "Forks Over Knives," "Vegucated," and "Got the Facts on Milk?" and you will see the truth about cow's milk. It's not only something vegetarians should pass up on, but it's something everyone should avoid. It's better for them, the animals, and the planet. Only baby calves should be drinking cow's milk.

Another issue is that in this press release they comment on how the milk alternatives "...often cost nearly twice as much as milk." They fail to cite the fact that cow milk is heavily subsidized by the government in order to keep the prices low, so we tax payers all pay to keep the price lower (even when we find it against our beliefs and don't drink it). When you add in the cost of subsidizing cow milk, along with the environmental degradation, animal cost, and human health costs, there's no comparison. Cow milk costs the country so much more than other types of plant-based milks!

Finally, they refer to cow milk repeatdly as "milk" and other types of milk as "alternatives." Cow milk should not be the measure by which we determine what is the standard and what is alternative. Milk, by defintion, can be the liquid from a mammary gland, but it can also be the liquid that comes from other grains, fruits, etc. It should be called "cow milk" just as it is called almond milk, soy milk, goat milk, etc. The only reason they would not want to do that is because they don't want people to have the cow image. But that's exactly what it is!

Any nutrition you can get from cow's milk you can absolutely get from other plant-based sources. And you will be leaving behind the cruelty and cholesterol!

If you are not a vegetarian or vegan, please learn more and move toward a plant based diet. If you are, please be aware that you may see this press release of theirs cited in news articles/stories. Don't fall for it! We vegetarians and vegans are much smarter than that.

Plant based milks taste great, are nutritious, readily available, and don't come at a cost to human health, the animals, or the environment. Find a plant-based milk that you like. In our house our favorite is almond milk most of the time, and soy milk some of the time. We always have almond milk on hand and sometimes swap it out with soy when it's on sale. There are almost always coupons available at the stores for plant-based milks, and you can stock up when it's on sale.

Check out this graphic I recently posted about cow's milk.