Annual Kids Veg Event at the Library, In the Books! Holding a Vegetarian or Vegan Kid's Event

So for the second year in a row, we at the Daytona Beach Vegetarian Society held our annual kid's event. The event was held today at the Port Orange Library, from 2-4 p.m. We showed the PETA movie called "Share Our World," had a discussion about the many ways we can help animals, and then we had some fun!

To make the event fun, we had a buffet table of vegan food that kids love (quesadillas, veggie dogs, mini-muffins, crackers with dip, chips, fresh fruit, and coconut milk. After the kids took about 15 minutes to eat some food, we showed the movie, then had the discussion. Once we were done that we had set up three "stations" for the kids to go to. At one station the kids could make their own vegan trail mix to take home. We purchassed bio-degradable plastic zip bags for this. At the next station we had a clown who did animal face painting, and at the third station the kids could make a healthy version of a sundae. The sundae had coconut ice cream, chocolate granola, and crushed pineapple (and was so good!).

We also gave prizes away, which were stuffed animals. To get lots of stuffed animals, I kept my eye open for the last month at garage sales and thrift stores, picking up ones that were in great condition. We had kids put their name in a bucket and as we pulled them out, one at a time, they could come up and pick which animal they wanted. We also had a table set out of veg literature and booklets for both kids and adults.

Events like this are so important and beneficial for vegetarian and vegan children, as well as for the public. Most of the chilren who attended the event today were vegetarian or vegan, and it gave them a chance to come together and be with other veg kids. They really enjoyed it! They also liked that it was an event for them. We also had some kids attend who were not yet veg, but were interested, which is always great. The adults loved this event, and told us how appreciative they were that we put it on.

Looking forward to doing it again next year! If you have a veg group (or environmental group) you should consider putting on a yearly event for kids. They really need the support and ability to come together with other veg kids. Plus, it provides a platform for non-veg people to attend and learn more. All around it's a great experience! Vegetarian kids and vegan kids love this type of event and it's great for them to have it. But it's also great for the community as well, as it focuses on the next generation of change-makers.

Because I'm also concerned with the environment, I tried to make this as eco-friendly as possible. We opted for paper cups over plastic ones for our sundaes, finger foods on the buffet table (to avoid more forks being used), bio-degradable bags for the trail mix, and I set up a little bag for people to put their plastic spoons in from their sundae (for recycling). I would have preferred eco-friendly spoons, but they don't sell them around here (I looked!). Next time I'm in Orlando I will stock up on them for future events.

A special thank you to VegFund, for helping to make this happen (again!). Although I'm not a big PETA fan, I have to say that "Share the World" is a good movie, and I'm glad they have it out. They also have some very nice literature for kids.

Here's a few pictures from the event this year: 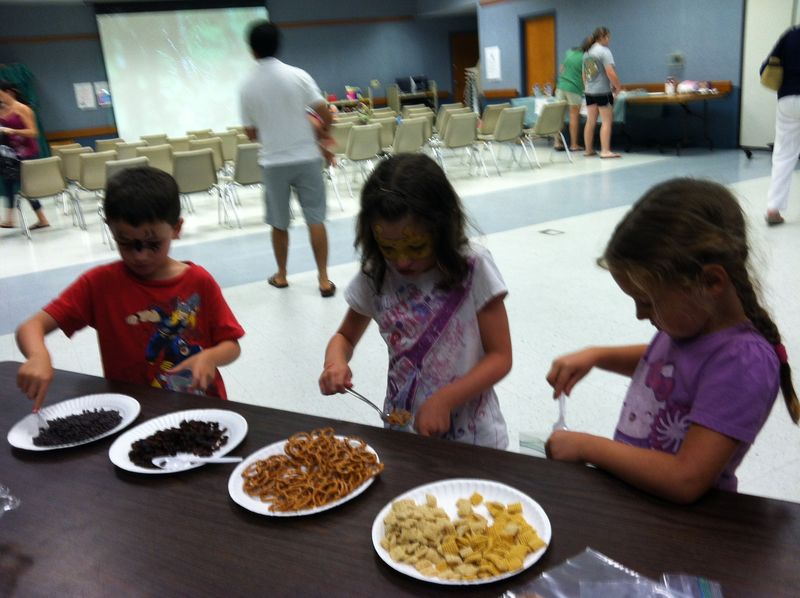