"Vegan is Love" Book Ruffling Feathers All Over the Place

Ruby Roth wrote the book "That's Why We Don't Eat Animals." It's a good book that we own and my kids 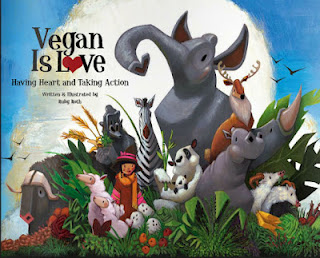 like. It's a message that I want them to understand. She has now released her second book, titled "Vegan is Love," and it is ruffling feathers around the country!

There has been a lot of controversy about this book. I've seen them discussing it on the Today show, as well as on news sites and more. I even came across this article today here written by the editor of Pork Magazine (you can imagine her position, right?).

People are up in arms that this kind of information is being put out for children. Why? Because they don't want their kids to learn about what goes on behind those closed slaughter house doors. Heaven forbid we actually teach our children a different way of life.

Critics like to say that it is based on "fear." Well isn't the idea of eating meat based on fear? How many times have you told someone you are a vegetarian or vegan and they ask about protein deficiency (or some other type of nutrient deficiency)? Haven't omnivores been lead into fearing going without eating animal products simply because they may shrivel up of some sort of deficiency? Why is it when the shoe is on the other foot the fear is a problem?

Furthermore, I don't think it is fear. I think it's based on education and information. There are plenty of books out there that discuss eating animals or have them pictured being eaten in the illustrations. Until recent years it was difficult to find a Thanksgiving book that didn't involve seeing a dead turkey on the table. So why is it that when we vegetarians and vegans have just a couple of books people are up in arms? Fear.

Ruby Roth's book "Vegan is Love" is about teaching compassion. It's about being aware of what is going on and using that information to make informed food choices. Compassion. How can that ever be wrong?

They say that no news is bad news when it comes to publicity for a product. So I hope that Ruby is selling a lot of books from all the controversy. I can tell you we will be adding it to our animal-friendly collection.

Kudos to Ruby for having the strength to put out a book that was bound to make waves. That takes courage. And in doing so, by getting people talking, the dialogue has been started and positive change will come out of it.