Teaching kids about compassion through lizards and other backyard animals 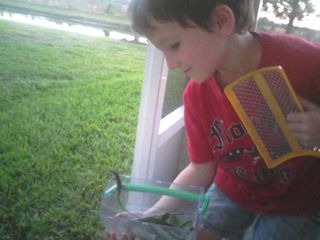 tow. It was a small carrier and upon further review it housed a little lizard. Yes, his friend had given him a lizard in a plastic carrier container to take home as a "pet."

While part of me immediately wanted to grab the container and rush it back outside to free the captured lizard, I didn't. I thought it would make for a good learning experience. The thing is, I wanted my son to want to free the lizard, not feel that he was forced to do so. Forcing him to free the lizard wouldn't teach him nearly as much as raising his awareness about keeping the creature captive and teaching him to have compassion for it. Teaching him to have compassion would go much further in the long run. Besides, just rushing it outside to free it wouldn't be showing my son much compassion, considering he was clearly excited about this new "pet" that he had.

So I took to sounding concerned about the lizard in how it would get enough food, oxygen, sunlight, etc. inside that carrier. How would it survive? How would he feed it? Would he be comfortable feeding it live crickets? Would it be fair to keep it from being out in nature, or possibly being in contact with other lizards throughout its life? I didn't pepper him with those questions, of course, because I wanted to give him things to really think about.

Over the course of the next couple of hours the lizard sat in that plastic container (which had holes and was made to house critters so I knew it would be okay for a while), as he mulled over every question I asked him about. Never once did I say he had to get rid of it. I was hoping it wouldn't come to that, and luckily it didn't. After a couple of hours went by we were reading together on the couch when he looked up and me and softly said "Let's go release the lizard, mom."

He was ready. It took a couple of hours, but he got it. He didn't want the lizard to live its life in a plastic container, rather than out in nature, where it would be free. With a smile on his face, he released the lizard outside all on his own. I was proud of him and I know that he learned a lesson that day, one of compassion and respect for other living creatures. One that will hopefully stick with him for a lifetime!

By the way... if he hadn't had a change of heart by bed time, I was planning in my mind that the lizard was going to somehow "escape" during the night. :)
But I'm glad it turned out the way it did... lesson in compassion learned!