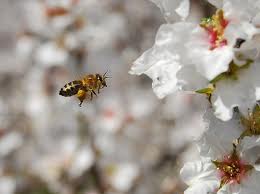 I just finished watching this brief Ted Talk titled "a plea for bees." I found the video really interesting and I think it further supports my opinion in my original post regarding bee exploitation and the great vegan honey debate.

In the video, Dennis VanEnglesdorp, an apiarist, discusses bees, including how they are vanshing, as well as how our food system relies upon them. I have argued before that to fit the actual definition of what a vegan is you would not only have to give up honey, but you would also have to give up almonds (and a long list of other plant based foods). This video supports that notion, because he explains how the bees are brought into almond crops for pollination.

I know many people want to use the term vegan and feel as though since they are avoiding honey they both fit the definition that Donald Watson set forth for it, as well as that they are avoiding bee exploitation. This is not true! As pointed out in the video, in addition to the almonds, one out of every three bites of food we eat is the result of work that bees did. And they don't just so happen to be flying by the crop and decide to do the work. No, they are kept by beekeepers and trucked into these crops in order to do the work. I'm sorry, my friends, but anything produced like that is not in keeping with the vegan definition, because bees are being exploited continuously.

As I said in that post over two years ago, bees may very well be the one animal on earth that we simply must exploit in order to survive, or at least have many of the plant based foods we eat. So the next time you find yourself giving someone a hard time about honey, whether they claim to be vegan or not, consider first if you are also contributing to bee exploitation. There's a really good chance that you are.

According to The Vegan Society, a "Veganism is a way of living that seeks to exclude, as far as possible and practicable, all forms of exploitation of, and cruelty to, animals for food, clothing and any other purpose."

Producing many plant based foods absolutely exploits bees and many people argue that beekeeping itself is cruelty toward bees. If you think it's wrong to keep bees and take the honey, thus avoiding honey, how can you justify bees being kept and used to make almonds? In both cases the bees are being kept by beekeeper, they are being exploited for human benefit, and there is no doubt that some are likely being injured or killed in the process.

Yet another reason to stick with using the term vegetarian when choosing a label...

Maybe, just maybe, vegans should stop giving people a hard time about honey and start trying to convince them to grow meadows and use less pesticides. That way we can stop killing off all the bees in the first place. Convincing people to do those two things is going to do far more to help the bees than people just avoiding honey.

A new concept (new for me) that came out of this video is "Nature Deficit Disorder," which Dennis classified as our disconnect with nature. What a concept! He has done a great job of putting it into terms that we can use to discuss this issue. Be sure to watch the video!