The news on this issue has been a little quiet, so if you haven't heard of this yet, you are not alone. 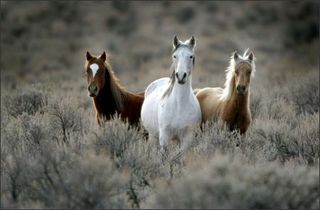 But a quiet little act happened over the last few days that will pave the way for many horses to be slaughtered.

President Obama signed a law that lifts the ban on horse slaughter plants in America. This means that hundreds of thousands of horses per year will be slaughtered for meat. The plants had been closed for several years, but after the legislature passed the bill through, he put his final stamp of approval on it.

This is a reminder to all those who tell me that they vote Democrat because they believe they are more animal friendly. Not true! This is just one of many examples. Don't overlook this when having those animal friendly political discussions. Horses will be slaughtered en masse for years to come and he is the one who put the final signature of approval on it, signing into the law of the land.

Read more on this ban being lifted here and here. One of President Obama's campaign promises was to end horse slaughter for good. Now he has done exactly the opposite. There were a couple of organizations that called on him to hold true to his campaign promise (read it here), but where was PETA and the Humane Society of the United States through this?

Sadly, it is reported that the same number of horses were slaughtered each year with the plants opened or closed. The horses have been being shipped to Canada and Mexico while U.S. plants were shut down. There is clearly, and sadly, a market for horse meat. In addition to human consumption, both domestically and abroad, horse meat is also commonly used to feed lions in zoos.

I have written about horses issues in the past. You can see a great video on on it here. Read my lengthy research article horse slaughter here.