Tonight I went to see Wayne Pacelle speak at the New Smyrna Beach Library here in Florida. If you are 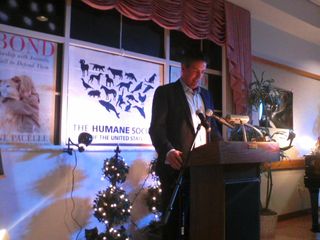 not familiar with him, he's the president of the Humane Society of the United States. He has a new book that has recently been released, called "The Bond: Our Kinship With Animals, Our Call to Defend Them." This speech tonight was a stop on his cross-country book tour.

I went with an open mind, because I know that the HSUS usually promotes animal welfare, moreso than animal rights. And I was hoping that he wouldn't just speak about the bond people have with cats and dogs. Wayne and I are on the same side when it comes to the fact that we both love animals and want people to extend compassion to them.

There were a lot of people that showed up at the library to see him speak. I took the opportunity right off to meet him, let him know I was from the Daytona Beach Vegetarian Society, and get my picture taken with him (wich came out really blurry because it was a camera phone).

I have to say that I was very happy with his speech tonight. He did talk about the bond with cats and 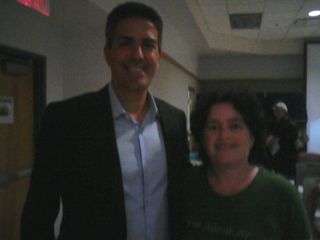 dogs, but he also made sure to focus on food choices in a variety of ways. I was really happy about that. He said a lot of good things that I hope resonate with some of the people that attended.

He said that we all have a bond with animals, but with some people it is just more pronounced. He also explained to people how we in the U.S. kill 10 billion land animals per year for food and that if everyone just cut back 10 percent it would save 1 billion animals per year. That's huge!

He also talked about how each meal we eat has moral implications and getting our morals and values in line with our actions. For example, most people have a bond with and love animals, yet they end up making choices daily (sometimes several times each day) that will either lead to, or help avoid harming animals.

Overall, great speech and very pleasant event. I do plan to read his book and I will post a review of it once I do. If he comes to your area, I highly recommend sitting in on it!

I wish my library was that progressive!

I know what you mean! I was surprised that ours offered it. Contact them and see if they would arrange it. Ours was arranged through the Friends of the Library.