It's October... a special time of the year for us vegetarians. We have a good excuse for telling everyone 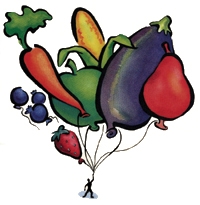 about vegetarianism (as if I don't already do it all year). It's Vegetarian Awareness Month and today is World Vegetarian Day.

October also marks my anniversary of becoming a vegetarian, which was 16 years ago this month (with a good portion of that time spent vegan). It was 16 years ago that I gave up eating animals and made a decision that I could live a great life without taking the lives of others. Since going vegetarian I have experienced many new foods, lots of ethnic foods, that I probably would have never tried, had I stuck to the standard American diet.

There are so many reasons why I love being a vegetarian. It's great to know that when given the choice, I take the one that does the least amount of harm to animals. I also know that my eyes are open to the food industry and understand the workings of the meat industry. I know about the health benefits to being vegetarian and I love that it is better for the planet. I also enjoy a cholesterol level of 112!

There are lots of good things coming up this month, including the Central Florida VegFest, and my own veg group is putting on a Vegan BBQ Bash in the park. We are inviting the public to come celebrate the month and nosh down on some great vegan BBQ.

Here's to another 16 years of vegetarianism! Happy Vegetarian Awareness Month, everyone!