10 Places to Get a Veggie Burger, Vegan and Non-Vegan

Veggie burgers are sweeping the nation and found in all areas of the country! Back when I first became a 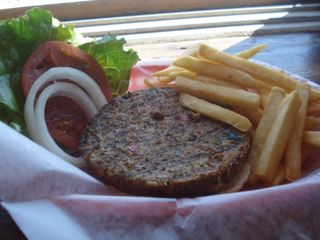 vegetarian, 15.5 years ago, I don't remember veggie burgers being offered in any restaurants. Today I find them in so many places. Hopefully, a sign of the times, and of things to come!

Here are 10 nationwide places you can get a veggie burger (assuming all restaurants are participating). Those in bold offer a vegan veggie burger.

Looking for veggie burger options in Orlando or the Daytona Beach area? Check these out:

Pictured: The vegan veggie burger at The Breakers in New Smyrna Beach.