The Do-Gooders and Treehuggers Protecting Alligators and Nature

Over this past weekend we took an airboat ride tour at Sawgrass Recreation Park. You can see pictures of it and a video on my other blog here. While it was a great ride and I loved seeing the alligators in their natural habitat, there was one thing that bothered me.

Someone on the tour asked the guide what the biggest alligator he had seen out there was. He said it had been since the 1970s, when he used to see 13 and 14-food alligators out there. He said he no longer sees them that big, because they don't get a chance to grow that big. He said there are many people that hunt and poach them, taking them out long before they get a chance to grow that big.

Another person followed it up by asking if it was legal for people to hunt and kill them. He said absolutely, that people eat the meat (yes, people in Florida do eat alligator meat, it is even on some restaurant menus) and use the rest of their body parts to sell (he said they even sold some there). On one hand he seemed like it bothered him that they were no longer allowed to grow that big, because they were being so hunted.

Then he followed it by telling the group that the "do-gooders and treehuggers" keep fighting to save the alligators and to do so they often put in to buy the hunting permits each year (take note, that's a smart idea!). He said they get granted some, so they end up saving "three" alligators a year. The "do-gooders 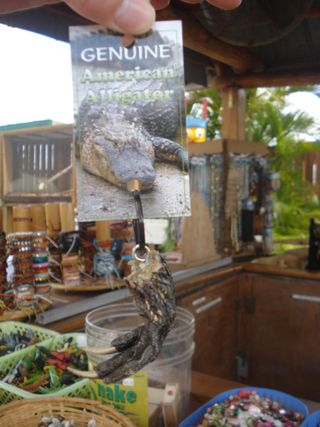 and treehuggers" title really stuck with me.

After the tour we walked over to a little gift shop they had and saw that they indeed did sell alligator "souvenirs" including heads, feet, feet back scratchers, and even alligator teeth in a bottle.

There are two kind of people in this world when it comes to nature. There are the ones who want to
exploit and destroy it for their own gain, which is usually fueled by greed. And there are those that want to be one with it, are in awe of it, and want to protect and preserve it, asking for nothing in return. The latter kind are the "do-gooders and treehuggers" and without them, our nature would be slowly destroyed forever.

I'm happy to say that I'm one of the "do-gooders and treehuggers" that would rather protect nature and its inhabitants, rather than see them killed and their body parts sold in a gift shop. How about you?