On this day in history, Gandhi assassinated

On this day in 1948 the world lost an amazing leader. Gandhi was assassinated in New Delhi by a Hindu 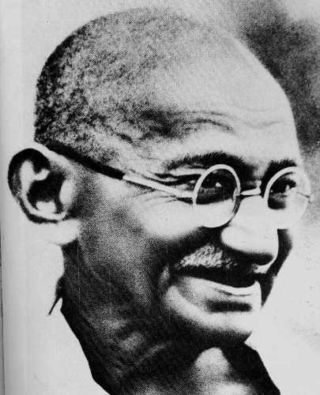 extremist. He may have died on that fateful day, but his legacy lives on.

Gandhi's message to the world was one of peace. As a vegetarian, Gandhi stood for peace when it came to both people and animals. He is still looked up to by many today and his insightful words will be around for many years to come.

Here are a few of the great quotes by Gandhi:

"An eye for an eye only ends up making the whole world blind." - Gandhi

“Be the change you want to see in the world.” - Gandhi

"The greatness of a nation and its moral progress can be judged by the way its animals are treated." - Gandhi

"It ill becomes us to invoke in our daily prayers the blessings of God, the Compassionate, if we in turn will not practice elementary compassion towards our fellow creatures." - Gandhi

"In matters of conscience, the law of majority has no place." - Gandhi

"To forgive and accept injustice is cowardice." - Gandhi

Thank you for the reminder. Gandhi is a hero to me, and his life is a good reminder of how all social justice issues are really facets of the same fundamental problem -- the oppression of the weak by the strong.