"The Get Healthy, Go Vegan Cookbook"

I just picked up the "The Get Healthy, Go Vegan Cookbook" by Dr. Neal 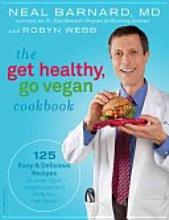 Barnard at the library. I was reading through the first pages of it on my way home (no, I wasn't the one driving). A couple of things stood out that I wanted to comment on here.

I wasn't especially thrilled with his section titled "A Word About Language" in the introduction. He could have used that section to clear up misconceptions about vegetarianism, but instead I think he only adds to the confusion.

"Following a vegan diet does not necessarily mean that a person is making choices for moral reasons and does not mean that he or she avoids using animal-derived products, such as leather or fur, although many people soon come to recognize that there are ethical issues any time animals are used."

I'm sure as you read this you can see the problem here. The word vegan is associated with a lifestyle. It's more involved than just someone's diet. It does take into consideration such things as leather, wool, and other animal-derived products. He is confusing the public about what the term "vegan" means. In his book he should have used "plant based diet" instead of the term vegan.

A plant based diet would still fit someone walking around in a leather jacket. But the word vegan does not, according to the definition created the person who coined the word, Donald Watson, and by the dictionary.

Dr. Barnard had a perfect opportunity to clear up confusion about what is vegetarian and vegan, as well as someone who eats a plant based diet. But he chose not to, which is a shame.

I agree, too bad Neal Barnard opted to increase rather than decrease confusion about the meaning of the term vegan. It may be that they want to continue to use the term but are frightened of being identified as being in favor of animal rights.