Observations about Tuna and Dolphin 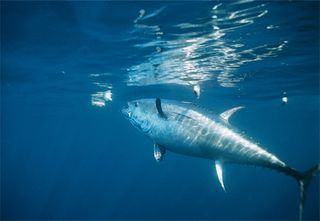 called Booth's Bowery. I'm not familiar with it, so I logged online to see what they have on their menu. As it turns out it is not a place that I would go to, as they don't seem to have any vegan options.

However, something caught my eye that I wanted to share with you all. If you look at the "classics" section of their menu offerings here, they have a little box that says they only serve tuna that is "flipper free" and not harmful to dolphins.

First of all, there really is no such thing as dolphin safe tuna. Anyone that knows how tuna is caught on a massive scale to feed the billions of people around the world that eat it, knows this. Yet it makes the consumer feel better by reading that disclaimer.

There have been an estimated 6-8 million dolphin killed by tuna fisheries since they started tracking it. Even now that there is "dolphin safe" labeling on the tuna cans there are still thousands of dolphin killed each year through the tuna catching process. The label keeps people feeling better about their purchase and food choices, yet death is still occurring, make no mistake.

Plus, even if NO dolphins died, there are still animals dying. The bycatch in the tuna industry is killing many other species, and it is killing the tuna.

Why is it that people don't care if the tuna are killed, but they want to protect the dolphin? Aren't both species worthy of protection and the right to live their life?

I remember when there was a big push for "dolphin safe" tuna. You'd think people would not want to kill Charlie (the tuna) as much as not killing Flipper. The Cove was a real eyeopener.

I remember that at as well, Jessica. And I agree, The Cove is an eye opener. Also Blood Dolphins on Animal Planet (Friday nights).

The restuarant is trying to promote their tuna as special when it is anything but. By federal law, ALL tuna sold in the US is supposed to be caught using so-called "dolphin safe" measures.

It's just like Tyson promoting their factory farmed chicked as "cage free". Factory farmed "meat" chickens are never raised in cages, so the designation is pointless.