Sheryl Crow Speaks Up for... Some Animals

Let me first disclose that I have been a fan of Sheryl Crow's for many
years. However, I was not impressed when I recently saw that she became a spokesperson for the Humane Society of the United States.

Why? Because I figured it's just one more celebrity getting their mug out there to say they were against animal cruelty, while they actually still participated in it. And I was right.

When you listen to what she says, it could go for any type of animal, including cows, right? She speaks of cruelty, the difference in life and death, the needless suffering of innocent animals, etc. Perhaps she is speaking of only dogs and cats, but all of these things she says also ring true when we apply them to cows. Which brings me to my next point...

Sheryl Crow is also a spokesperson for drinking cow milk. Yup, the same woman who is promoting the end of animal abuse for HSUS is also promoting the drinking of milk for the dairy industry. See the problem here?

Recently the public relations people at WhyMilk.com sent me a media 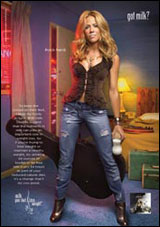 alert about a new compaign they are launching to get kids to eat breakfast cereal topped with cow milk (to which I replied explaining how I was against this idea). When I logged onto their site to see check out how they were peddling the product, I clicked to see the celebrity milk mustache participants. There have been many more over the years, of course, but there was Sheryl Crow (see it here).

Although there is no link to embed her video discussing her participation in the milk mustache campaign, you can visit the page above and watch it. She talks about how she was "so excited" to be a part of that promotion and how she drinks milk and eats cream cheese all the time.

I have written before about "famous vegetarians" and celebrities promoting animal rights. Every time I see a celebrity promote animal rights or vegetarianism I am a bit cautious to buy into it or get excited.

I think this serves once again as a reminder that sometimes celebrities are really promoting themselves more than they are what they are peddling in their ads.