A BJ's Brewhouse just recently opened up in Daytona Beach. The place 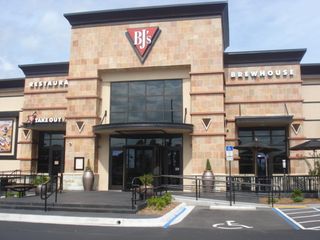 looks nice and others have already told us that it was good. This week we stopped in there and tried the veggie burger with fries.

The atmosphere is quite nice in the restaurant. It's very nice, kind of upscale. They offer a full bar and a large menu of items to chose from (not a lot of vegetarian items, however).

The fries were really good! They give you a choice of wedge cut or thin and crispy. The bun was huge, too big in fact, and I had to chip some of it away. The veggie burger was not the best I've had in a restaurant (Red Robin and Johnny Rockets are my favorite), but it was good.

The menu didn't mention any type of dairy being in the veggie burger. 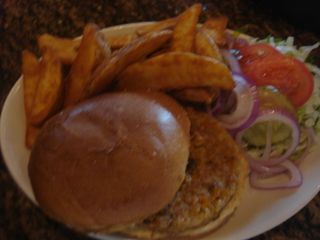 However, I contacted the company when I got home to inquire about it and was informed that it does indeed contain milk! So the veggie burger at BJ's Brewhouse is vegetarian, but not vegan.

I love BJs! I always get their pizza with no cheese, fries, and a big beer. I wish their burger was vegan too, then it'd be a veritable vegan paradise. Luckily, there is a Red Robin in the same shopping center the BJs is in, so I can get fries from BJs to-go, and a burger from RR, lol.

I haven't tried their pizza, maybe I will need to try it!