Did you happen to read the June 2010 issue of Parenting magazine? While 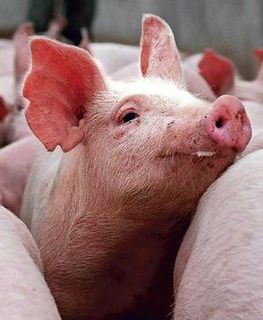 sitting in the pediatrician's office today for my son's school physical, I picked it up and started thumbing through it. I landed on a short piece aimed at parents of 5 to 6 year olds, titled "Look Who's for Dinner."

The article (read it here) takes a look at how children around this age go through what they referred to as a "common developmental phase" where they start questioning where their food comes from, particularly regarding "meat."

The piece is not completely all bad in the advice that they give. They suggest you answer the questions honestly, allow them to opt out of meat-eating if they want to, and that it's okay if they were to stick with being a vegetarian.

However, there were two things in this article that bothered me:

2) The registered dietician quoted, Ellyn Satter, provides an example of how parents can be "truthful" in their response about the animals. Yet her example is not all that truthful. She says "The animal dies - it happens quickly, so the animal isn't afraid. Then the butcher turns it into food." Since they are advising that parents be "truthful" in their response, we should debunk the idea that 1) the animal dies quickly, and 2) it isn't afraid.

Let's face it, any factory farmed animal dies a slow and miserable death that starts with the day they were conceived. And if we are only talking about what happens at the slaughterhouse, even then it's not always quick. I've seen the videos of animals suffering horrendously leading up to their final breath. And... even if it were that they all died quickly it still wouldn't make everything okay (for a host of ethical reasons).

Secondly, anyone that feels that the animals are not afraid at the time of slaughter has kept themselves sheltered from the realities of a slaughterhouse. There are plenty of video, as well as written, accounts as to what takes place. Clearly the animals sense death and they are frightened. Are we really to believe that an animal stands there in an unfamiliar place, smelling death, hearing the horrific sounds, seeing fellow creatures being slaughtered, seeing a gun come toward it's head, or a knife toward its throat, and it is not afraid?

I would suggest that the article author, Kristin Courtemanche, as well as her quoted source, Ellyn Satter, take the time to learn more about the meat production process. They can do this by reading a number of good books, such as "Eating Animals," as well as watching videos (there are plenty online at YouTube, such as Meat Your Meat).

I wholeheartdly believe we should be honest with children about what "meat" is and how it gets to the store. My kids know that pork is pig and they know that it wanted life, rather than to be eaten by someone (not to mention in a country that has an abudance of plant-based foods to choose from), only to be crapped into the toilet the next day.

But since we are being so truthful... "Parenting" magazine likely wouldn't have published the piece without such info. Because being outright truthful would have made too many of their readers uncomfortable... because when it comes to the truth about "who's for dinner," even most adults can't face the music.

"parents can be "truthful" in their response about the animals."

They're 6 year olds. You don't give them the "truth" as you see it.

Pork comes from a pig is good enough for that age.

We are talking about food here, not sex. Six year olds aren't (or shouldn't be) having sex. Yet they have eaten food every day since birth. There is a big difference.

I would know more lie to my child about what corn or cabbage is than to lie about what pork IS. Any parent who feels the need to lie to their child about eating animals is clearly not comfortable with the idea of it themselves.

If you feel confident in feeding your child animals and that it's the right thing to do, you should be honest about what it is and where it originated. Just like if your child asked you about what an ear of corn was and how it was made.

Food is not a topic we ever need to hide from our children. Quite the contrary, we should be honest, open, and teaching them everything about it, so that they can grow up to make informed choices, rather than being "schooled" on food and nutrition by those who spend billions per year pushing their crap products.