In Praise of Homemade Veggie Burgers

I will admit that I am a veggie burger fan. But not all of them are created equally, that is for sure! I have come across some that were 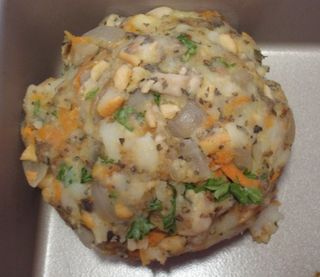 tasteless, or even worse.

When it comes to store bought veggie burgers, Helen's Kitchen Tofu Steaks take the top prize with me. When I'm dining out it goes to Red Robin's vegan Boca burger option, served up with their ever-so-fattening bottomless steak fries (yum!). But when it comes to eating in my own kitchen, homemade veggie burgers is where it is at.

If you haven't yet made homemade veggie burgers I urge you do so. They are easy, you can control what goes into them (and what stays out!), and they are far superior than any you can purchase at the store. And let's face it, there is a certain sense of satisfaction that comes from making them yourself.

Through some of my favorite cookbooks, including "1,000 Vegan Recipes"

What's your favorite veggie burgers at home, grocery store purchased, or dining out?

it. They are easy to make, although a little time consuming (but worth it), and taste great. I even made them up hours ahead of time and put them on a pan in the fridge until it was time took them (that way I could visit with my guest instead of prepare everything).

Pictured: The Very Veggie Burgers before being cooked and then ready to eat, served up along side vegan coleslaw, chips/salsa and grapefruit.

Guess I'll have to check out "Vegan on the Cheap." I already have way too many cookbooks but.... ;)

Jessica, I'm in the same boat! I have so many cookbooks. But I just love them!
I miss living near a Trader Joe's. I used to love shopping there (with the exception of how they over-package their produce). But they had some great items. We don't have any near us now.