Do you believe that PETA kills animals? If you are not quite sure yet, I 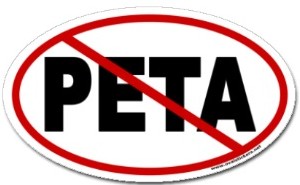 have dug up some credible sources that have the facts.

I can understand where you are coming from. It's difficult to believe that an organization who claims its mission is to help animals would actually kill them, but it's the truth. After all, their name implies they are being ethical to animals. Yet I can't see how taking healthy animals and euthanizing them is ethical (as well as putting their dead bodies into grocery store dumpsters). And if the animals are unhealthy, they should get them medical care to the best of their ability.

PETA is good at fundraising. And with those funds they kill animals. With them making $34 million per year they could afford to help a lot of animals. But they don't. Instead, PETA kills animals and leads its supporters to believe they are helping the animals they rescue.

Here's some credible sources for the information, and be sure to watch the video below:

Better dead than fed, PETA says
DON'T BE FOOLED by the slick propaganda of PETA, People for the Ethical Treatment of Animals. The organization may claim to champion the welfare of animals, as the many photos of cute puppies and kittens on its Web site suggest. But last week, two PETA employees were charged with 31 felony counts of animal cruelty each, after authorities found them dumping the dead bodies of 18 animals they had just picked up from a North Carolina animal shelter into a Dumpster. According to the Associated Press, 13 more dead animals were found in a van registered to PETA. Continue reading...

PETA and Euthanasia
Nearly a decade later, Daphna Nachminovitch still remembers the rerelease of the Disney classic "101 Dalmatians" and the tragedy that followed. First there was a spike in sales of the famous spotted breed. Then, in the months that followed, shelters took in hundreds of Dalmatians from disillusioned pet owners around the country. "As soon as the puppies outlived their cuteness and the kids didn't want to scoop the poop anymore, the dogs were dumped in shelters," says Nachminovitch, vice president of cruelty investigations for People for the Ethical Treatment of Animals (PETA). "Many of them had to be euthanized, because there was simply no place for them to go."

But what many animal lovers don't realize is that PETA itself may have put down some of those unwanted Dalmatians. The organization has practiced euthanasia for years. Since 1998 PETA has killed more than 17,000 animals, nearly 85 percent of all those it has rescued. Continue reading...

People for the Ethical Treatment of Animals (PETA) Kills Animals
For example, PETA's "Animal Record" report for 2009, filed with the Virginia Department of Agriculture and Consumer Services, shows that the animal rights group killed 97 percent of the dogs and cats in its care last year. During all of 2009, PETA found adoptive homes for just eight pets out of the 2,366 it took in in the Commonwealth of Virginia alone [PDF]. Continue reading...

INGRID: "Now let me explain why PETA believes euthanasia is the kindest gift to a dog or cat unwanted and unloved. Please also try to put yourself in the place of those of us at PETA who care deeply for animals yet who have to hold the animals in our arms and take their lives because there is nowhere for them to go. Continue reading PETA response regarding issue.