According to the dictionary, empathy is:

"the action of understanding, being aware of, being sensitive to, and vicariously experiencing the feelings, thoughts, and experience of another..."

What separates vegetarians and vegans from omnivores, for the most part, is 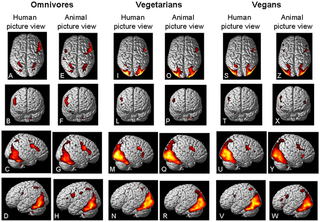 empathy. New research that came out last month monitored brain functioning of a group of vegetarians, vegans and omnivores, while being showed pictures of human and animal suffering.

So what I've thought for years has been confirmed with this study... my brain functions differently than 97 percent of the American population. And if it means that it is because I have empathy toward human and animal suffering, then it's good news to me.

You can view the entire study here. Here's an article about it on Psychology Today.