According to the dictionary, a stereotype is a standardized mental picture that is 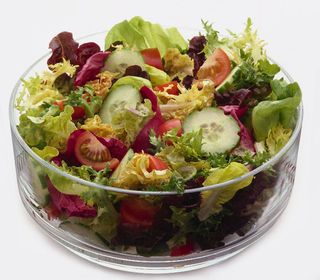 held in common by members of a group and that represents an oversimplified opinion, prejudiced attitude, or uncritical judgement. And when it comes to vegetarianism, there are a lot of stereotypes.

Here are a few that I have come across in my nearly 15 years of being a vegetarian:

Being Liberal. Many people falslely believe that all vegetarians are liberal or democrat. Not so. I'm a conservative Republican and I know other vegetarians who are the same. In fact, the research shows that it's nearly evenly split on this issue. Read more here.

Supporting PETA. I can't tell you how often people assume all vegetarians love PETA. Totally not true! I'm not a fan and know many other vegetarians who feel the same way (including some who are vegetarian for animal rights reasons).

Always Skinny. It is a myth that vegetarians are all skinny, weak beings. Sure, there are some out there (there are also some omnivores who fit the description), but not all vegetarians are skinny. I'm not and I've met plenty of other vegetarians over the years who also are not. It takes only 50 extra calories per day above what your body consumes to gain 10 pounds per year (according to The China Study). And it doesn't matter where those calories are coming from, it's a numbers game.

Salad Eating. Most people seem to think if you throw a vegetarian a salad they are in their glory. While I do like salads, I don't feel as though all my meals dining out should be comprised of lettuce. Quite to the contrary, we actually like a variety of dishes that don't involve dressings!

All Women. No, vegetarians are not all women. There are just as many vegetarians out there that are males. And the nice thing, is they are starting to make their voices heard.

All Preach. No, vegetarians do not all preach to people about their dietary or lifestyle choices. Some, like me, are outspoken about it. However, others, like my husband are not so outspoken. While he will happily engage in discussions about it with people, he doesn't go out of his way to bring it up to others. I've met other vegetarians who are the same way.

Love Animals. Not true! Many people are vegetarian for health or religious reasons and really don't care about the ethical or compassionate aspect of vegetarianism.

Did I miss any vegetarian stereotypes? Leave a comment of any others you know of.