As I've mentioned plenty of times before, there's one thing PETA is good at, and it's 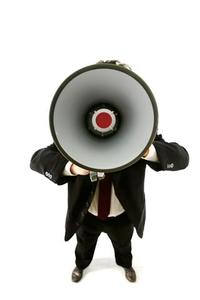 It's like the old saying goes - the squeaky wheel gets the grease! If you keep hearing PETA's name in the news you are assuming they are actually helping animals and will feel more inclined to dole out the cash to them. But believe me, just because you hear their name doesn't mean they are helping animals.

Case in point: this week they bought ad space on an man's urn (see article). The man is dying from colon cancer and so that the financial costs of cremation were not left to his wife, he sold ad space on the urn.

PETA was one of the first to plunk down the $200 to do it, and in the process put two cheesy ads on this man's urn. Here's what they paid to have put on the man's urn:

"I've Kicked the Bucket — Have you? Boycott KFC." The other reads: "People who Buy Purebred Dogs Really Burn Me Up. Always Adopt."

A bit ridiculous if you ask me. Ads showing how little they care about respecting this dying man. Had they more decency they would have gave the man the $200 and took a pass on placing the ad. Or even better yet, they could offered to pay for his whole cremation. That would have gotten them the media attention they so desire and they would have looked decent in the process. At the very least, they could have placed the ad and just put their logo. They didn't need to write such insulting and condescending lines on a man's urn.

Furthermore, PETA doesn't fight for the end of animal use (animal rights) because they are in the business of animal abuse. Think about it.... if the world woke up tomorrow completely vegan they would be out of a job and successful business...one that makes them $34 million per year. Their very existance and all the cash they collect each year is dependent upon the continuation of the exploitation of animals.