Today was a great Mother's Day! We started the morning by going to my one 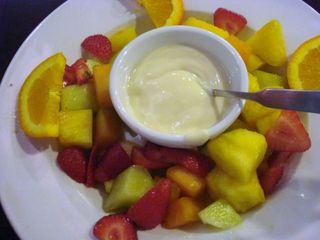 of my favorite restaurants, Ethos Vegan Kitchen, located in Orlando. It was the first time that we had ever eaten the brunch there, because we usually go on Saturday's (brunch is only served Sunday's).

When we arrived, I was surprised at how busy the restaurant was. It was wonderful! The place was packed with people, many obviously celebrating Mother's Day and dining on vegan brunch specialties like French toast, fruit platters, and biscuits and gravy.

As we ate our delicious food I looked around and was thrilled that so many people had chosen to dine vegan-style this Mother's Day morning. While they were taking mom out to a special breakfast, in doing so they also helped female non-human animals. 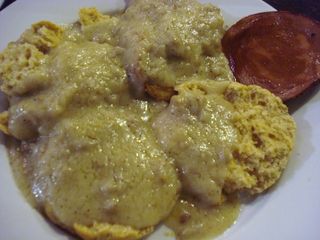 exploitation of mothers. Non-human mothers. They probably ate things like eggs, meat and dairy, all of which are based on the explotiation of the female reproduction system of non-human mothers.

We shouldn't make other mothers experience pain and discomfort so that we may dine with our families. Kudos to all you that celebrated Mother's Day by respecting non-human mothers, in addition to your own!

(pictured: Our brunch from Ethos Vegan Kitchen, including vegan buscuits and gravy with a side of vegan Canadian bacon, and a fruit and and soy yogurt platter)

Oh how I miss Ethos! Great people and great food :) I never made it out to brunch since it was * cough * so early on a Sunday.

I was going to cook for my mom but got scared at the last minute. She's been more supportive including a bunch of cookbooks she's picked up at thrift stores. I have a billion already but didn't have these like Vegan Planet.

Excellent point, as usual. I should honor all mothers. I did for my breakfast, at least.