My kids love cupcakes, even if we do only make them every few months or for 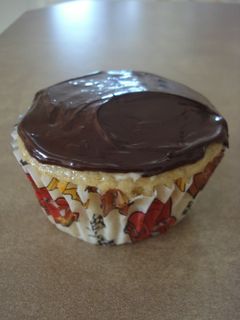 The recipe was easy to follow and came out good. When it came time for the frosting, I realized I didn't have enough powerdered sugar on hand to follow the recipe (hey, I hadn't planned making these, it was a spur of the moment thing). I searched around for various vegan recipes and didn't have everything on hand to make one of them.

So I took some vegan dark chocolate pieces I had in the cupboard (that I use for making our trail mix), and put about half a cup of them in a glass bowl. I then microwaved it enough to melt them. I used that as frosting! It worked out great and tasted good.

They were so excited because a couple of weeks prior we found some vegetarian cake decorations at the farmer's market. So they got to decorate the cupcakes. It nearly killed them to wait until after dinner to have one, but they made it through and loved every bite! 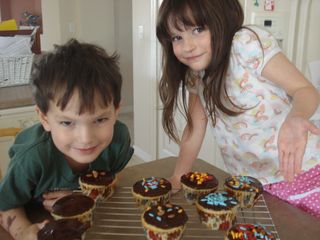