Should pain be the criteria when it comes to eating animals?

Yesterday's post, in response to wanna-be vegans eating oysters, created a lot of 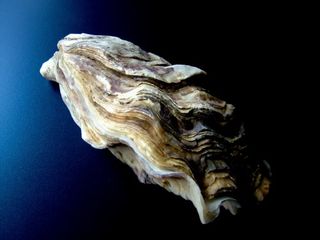 buzz. Within a couple of hours, hundreds of people had read and responded to my post. Overwhelmingly the feedback suggested that because oysters don't feel pain it is okay to eat them.

First of all, nobody knows whether or not an oyster feels pain. There is no way to determine that. You may try to base it off of how humans feel pain, but that may not be how they feel it.

People love to point to Peter Singer in their justification for eating oysters, saying that he, in essence, has said it is acceptable because they don't feel pain. Check out this link here, which is "Peter Singer on Fish." Notice the paragraph at the end, when he says:

"But while one cannot with any confidence say that these creatures do feel pain, so one can equally have little confidence in saying that they do not feel pain. Moreover, if they do feel pain, a meal of oysters or mussels would inflict pain on a considerable number of creatures. Since it is so easy to avoid eating them, I now think it better to do so."

Beyond what Singer has to say, should pain be the criteria for which we decide to eat an animal or not? I don't think so.

I think if that's all it is about you could find a free-range raised animal that has been treated humanely, and perhaps get permission to inject it with anesthesia to numb it, before taking its life. So you dealt with the pain problem, but does that make everything okay? No. You still needlessly took an animals life.

I, along with millions of others, do not believe that animals are here for human pleasure (whether in the form of eating, entertaining, experimenting, etc.). They have their own life, they want to live, and to take their life to suit your appetite is not only unnecessary in today's world, but is selfish, because you deny other animals the right to life when you don't need to.

Thanks so much for the response to vegan.com. More often it seems that vegan.com is anything but an advocate for vegan. There's little point in me elaborating on the whole interaction between vegan.com and slate because you pretty much said it all. I am serious about being vegan because it means something to me and to have that yahoo on vegan.com try and sell us on nonvegan stuff as if it were somehow completely vegan "appropriate" is insulting.

What I keep hearing is that "I don't eat anything with a face." Which would mean oysters, mussels, clams, etc would be ok to eat. However, they are still animals to me.

I didn't realize that this happened. Thanks for pointing it out!

Jessica, there is a way around that. For a decade I have always said "I don't eat anything that shits."

It's straight to the point. It doesn't matter if it has a face, but even oysters, mussels and clams excrete waste! :)

And besides, people get the larger picture better when I say that!