Until 2007, America had two horse slaughterhouses. One located in Texas and one 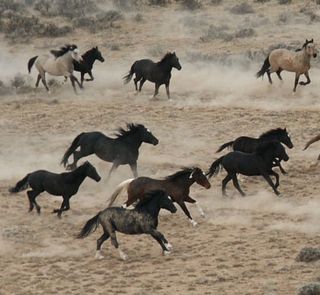 in Illinois. Both of them closed that year and since then, horses have been being shipped either to Canada or Mexico for slaughter.

I have written before on what is going on with the horse trade/issue in this country (read it here). Sadly, the American wild horse population is being decimated and dining on horse meat is becoming increasingly popular (in America, as well as abroad).

This week Missouri paved the way to be the next state to host horse slaughterhouses. Law makers voted in favor of allowing horse slaughter for human consumption. Shame on those lawmakers and anyone else that supported this move.

You can read about the issue here and here.

Currently, there are two bills in the U.S. legislature being considered in regard to horse protection (Prevention of Equine Cruelty Act and the Restoring Our American Mustangs Act). Contact your local representatives to let them know you support a ban on horse meat in America, as well as providing protection for the American wild horse.