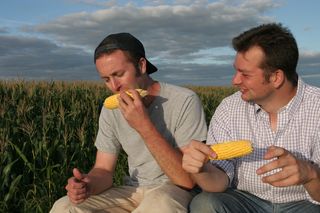 "King Corn" (thank you).  I finally got a chance to watch the full movie.

As someone who has been trying to avoid high fructose corn syrup for at least the last three years, I thought the movie was interesting. The documentary sheds light on America's corn growing and how it ends up being in just about everything we eat, because it is turned into corn syrup's and fed to livestock.

The movie provides a good look at the corn growing process and the over-use of corn in the country. It also shows the cow feedlot process, which is quite interesting. They also get input by outside sources, including Michael Pollan.

My only complaint about this film is that the guys seemed very apathetic to all they were discovering. They remained flat the entire time and kept on eating all the same things, as if everything they learned made no difference at all. If that's how they felt, then possibly the film will have the same non-impact on the majority of people who watch it. With everyone continuing the behavior they had before watching and learning so much, then nothing will change and perhaps the film was pointless.

Overall the movie is definetly worth watching. Hopefully those who learn more will begin to at least try to avoid high fructose corn syrup. Companies are taking notice that people don't want it and are beginning to take it out of their products (case in point: Pepsi recently took it out and opted for sugar).

Check out the movie trailer here: