I don't eat black olives, yet nobody cares.

I just don't eat black olives. That's all there is to it. If they come in a dish at a 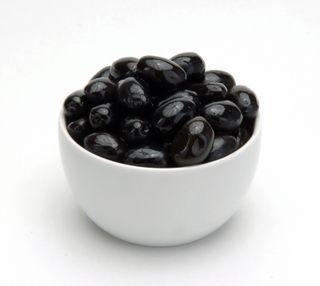 restuarant, I ask that the dish be made minus the black olives. At home I use them sparingly, and only for my family's food, not mine.

Why? That doesn't really matter and most people never ask me. But I just don't eat black olives!

I've told people this numerous times over the years and it never raises an eyebrow in response. Nobody cares that I don't eat black olives.

Yet I've also told people I don't eat meat many times over the years and it's usually met with an array of reactions that range from shock to horror to disbelief and even defense. Occassionally people have a genuine interest in wanting to know more.

By the way, I don't eat black olives simply because I don't like the taste. To me, they are just little balls of salt that dominate the dish.

And now all your comments should be something like: "What? Why not! They're so delicious! How do you eat /Mexican/ without olives? What about green olives?"

I don't like bell pepper and have found the most odd dishes with it that I wouldn't think would have it. Or that one restaurant will have it in the same dish another restaurant doesn't have them in.

I know, Jessica! One person on my Facebook fan page joked and asked how I get my salt? Funny!

But it's so true, people don't care if you don't eat black olives, or bell pepper in your case, but they take it to heart when you say you don't eat meat. So odd.