We took the kids to see "Oceans" on Earth Day. We also took them last year to see 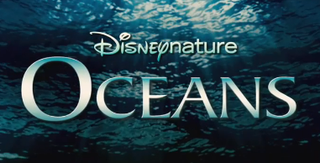 the Disneynature film, which was "Earth."

The movie is really good. It's filled with lots of interesting things to see and learn about.

I also really appreciated how they touched on over-fishing and what humans are doing to destroy the oceans. I was about brought to tears when they showed the shopping cart sitting at the bottom of the ocean floor. It's incredibly sad what our species is doing to the world.

I would have liked them to speak on that issue longer, but I realize they don't want to turn off a large part of their audience. I think they focused on these issues long enough that those watching will get the point.

Two thumbs up for the Disneynature "Oceans" movie!

Check out the trailer here.