Last night I made the black bean burger recipe from Robin Robertson's "1,000 Vegan 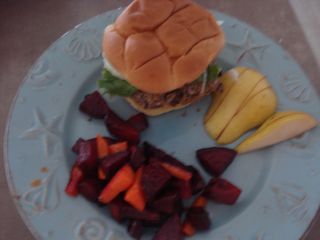 Recipes." If I haven't mentioned this before, the book has quickly become one of my favorites, if not the favorite cookbook.

The black bean burgers were super easy to make, held together well and tasted good. I appreciated that they were not spicy like so many other black bean burgers, so that the kids would also eat them. (Although my husband did kick it up a notch by topping his with jalepeno's.)

This is a recipe that I will be making again for sure. Homemade veggie and black bean burgers are the best and so much better than buying them from the store, pre-made. They taste better and you don't have to worry about all that hexane that has been making the news as being in some veggie burgers.

(pictured: the black bean burger, served up with roasted beets and carrots, and pear)