Veganism Is Part of Vegetarianism

It is always interesting when you come across vegans 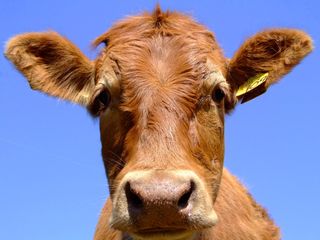 bashing other vegetarians. It must have slipped their mind that veganism is part of vegetarianism.

According to Merriam-Webster, the definition of vegan is "...a strict vegetarian who consumes no animal food or dairy..."

It should also be noted that veganism grew out of the vegetarian movement.

It is simply counterproductive to vegetarianism as a whole (which includes veganism) to bash vegetarians or vegetarianism. Simply because you have made the decision to try to live as a vegan (in so much as it is possible, considering all the factors that do not fit the vegan definition, read this), it is silly to look at others who may be another form of vegetarian and tell them they are doing no good or are the same as an omnivore (even if someone stayed an occassional cheese-eating vegetarian their whole life they would still be greatly reducing their contribution to cruelty and doing better for the planet).

Telling people it is veganism or nothing will send more people running toward omnivorous living than any form of vegetarianism. It hurts the vegetarian movement.

Vegetarianism is absolutely a stepping stone to veganism for most people. And there is a good chance that those hurling such comments once considered themselves vegetarian, rather than the subset vegan. But push too hard to get people to go to the next step, just because you are there already, and you may send some back in the other direction. The percentage of vegans in America steadily hovers around the one percent mark. With such attitudes and bashing other forms of vegetarianism, it may never rise.

Remember, when you hurl insults it automatically puts people on defense. No change will take place when people are on defense. People make changes in their own time. If they are already one form of vegetarian they may eventually move to another form, such as veganism. But pressuring and insulting them to do so is the wrong route to take and says more about you as a person than about the message you are trying to convey.

Vegans trying to insult other types of vegetarians is akin to a lacto-vegetarian hurling insults at an ovo-vegetarian. It's makes no sense for one form to stand there wagging their finger at another. All of us vegetarians, regardless of which form we follow, share some connection. So rather than blindly play follow the leader and blurt out such nonsense, think for yourself and whether what you are saying will help or hurt in advancing vegetarianism.

You can read my prior thoughts on choosing a label here and how vegetarianism is a gateway to veganism here.

Again, veganism is part of vegetarianism. So bashing vegetarianism is simply a waste of time and energy that could better be spent trying to actually advance the movement.