Tonight for dinner I made the Spinach Souffle from Robin Robertson's book "1,000 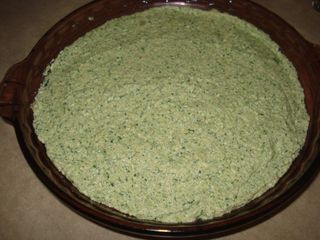 Vegan Recipes." I've never made a souffle before, so I was intrigued when I came across the recipe.

I found out when I went to make it that I don't have a three quart casserole dish, as it calls for. All I have is a two quart one. So I had to bake it in that dish. Because of this, I really needed to cook it a little longer to have it set more throughout. But I rushed it because I had a meeting to get to, which made the consistency a little off. However, I'm sure if I had used a three quart dish it would have been fine.

The recipe is very easy to make. All together it took about an hour and 20 minutes, from start to finish. So you have to plan accordingly when preparing it.

The flavor of the souffle was good! I will make this again and try to get the 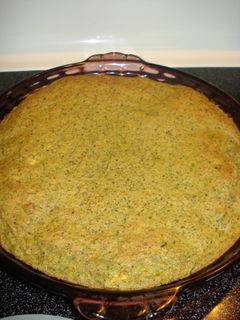 timing right on my current dish, or buy a three quart casserole dish. I may even try making it in individual baking dishes next time (and try to figure out the right timing for that!).

Yet another yummy vegan dish from this vegan cookbook that I love!

(pictures: going into the oven, after cooking)