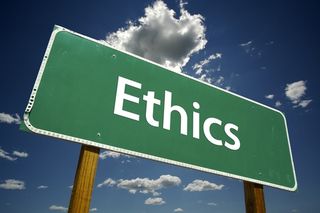 vegetarian." While I live a vegan lifestyle, in so far as one can meet the true definition of a vegan (read more), I prefer calling myself an "ethical vegetarian," which often raises questions. Some want to know: What is an ethical vegetarian?

Fair enough. Unlike the term "vegan" there is no set definition for "ethical vegetarian" out there, at least that I can find. So I will share with you here what my definition of it is.

An ethical vegetarian is someone that chooses a vegetarian diet based on moral reasoning. As an ethical vegetarian, I believe that eating or using animals is morally wrong (regardless of whether or not it is a healthier move for my body, my religion, the planet, etc.). I believe it is unethical to eat, wear, or use animals in entertainment, for experiments, etc. I am against animal cruelty and believe that using and eating animals, doesn't getting any more cruel.

As an ethical vegetarian I believe in animal rights over animal welfare (read more). I believe that animals want and have their own life and that it is morally wrong for humans to artifically inseminate, cage, break their spirit, use, eat, kill them, etc. I do not believe other animals are here for humans to use as they please.

Ethical vegetarianism is a selfless act. I stand nothing to gain by trying to introduce others to the idea. The animals are the ones that benefit. What is in it for me is a clear conscious that I am not contributing to a blood bath, animal cruelty, and turning a blind eye to something that I feel is unethical.

This coming October will be 15 years that I've been an ethical vegetarian. But before making it official that year, I had been building towards it for what I believe is most of my life, even identifying animal cruelty as a child (read more).

Ethical vegetarianism is about living in a way that eliminates (as much as possible),  the pain and suffering caused to other animals. To me, it's the same thing as "veganism" but it's a term that I prefer, because using the term "ethical" right up front lets people know where I stand and why I choose this lifestyle. Is it perfect? No, not even close. But no diet or lifestyle is. We each have to do what feels right for us, so that we live in accordance to our own values.

So why not just make the switch to calling myself a vegan? I often ask myself that, too. I can't pinpoint it! Maybe because I've been calling myself an ethical vegetarian for so long that it just feels strange to make such a switch. Maybe because the word "vegan" has such a negative connotation with people. Many people hear the word vegan and immediately become defensive, picturing stunts to get publicity and attention. Maybe because I feel there are still things that I do that don't meet the true official "definition" that has been laid out for vegan (such as eating almonds, feeding my cat non-veg food, etc.) Maybe because I don't want the vegan police putting my life under the microscope, as they so often do, so they can try to find flaws and where I'm coming up short. Perhaps I'll get to that point, eventually. But for now, I'm comfortable with "ethical vegetarian." I avoid the scrutiny of the over zealous vegan police and I get to keep using a term vegetarian, which has been around a lot longer than the word vegan.

Great post! Thanks for the clarification... At one time even when I was eating eggs and dairy I considered myself an "ethical vegetarian"... But of course, I wasn't aware of the issues beyond consuming "flesh"...

The crux of it is the living with as little deliberate harm to Others... By any name one chooses - It's the right thing to do! :)

Thanks, Bea! I agree, it is the right thing to do, no matter what we call it. I think once people know about the cruel things beyond eating flesh, if they are an ethical vegetarian they will abstain from them.

I think I understand. But do you even meet your own self-described definition of ethical vegetarian if you continue to eat almonds or feed your cat non-vegan food?

Is it possible to survive on food that is grown without the use of and animal products and entails no animal harm? No. That's why "as far as possible and practical" is included within the definition of veganism. I take solace in knowing that the more vegans we have, the more veganic farming there will be and the more farmers will take into account animal lives while harvesting their crops.

I think saying that you can't be vegan while eating almonds is like saying you can't be a pacifist if you pay mandatory taxes to a government that kills people. It may not follow the strictest interpretation of the word, but I think then that the issue is with the interpretation and not the word. Nobody can be 100% anything.

Unrelated to that whole thing, might I suggest a slight modification to your definition to include use of animals? If someone raises an animal and treats her like a queen and kills her painlessly while she sleeps, then it would be hard to argue that they have caused pain and suffering to that animal. But you'd still be against that, right? So then the issue isn't with only suffering and pain, but also with use.

On the issue of feeding meat to your companion animals. I think this might be helpful in reconciling that with veganism: http://www.abolitionistapproach.com/follow-up-to-pets-commentary-non-vegan-cats/

Or maybe you've already listened to that and it didn't do anything for you. Either way, just thought I'd throw it out there.

One more thing to consider: Most people think that vegetarians eat eggs and dairy. That's the default perception. When they see "ethical vegetarian" and don't read any further to take the time to figure out exactly what that means (and a lot of people won't), then they are led to believe that a person who eats eggs and milk and wears leather and participates in other forms of animal exploitation can be ethically consistent. The term "vegan" has been, for the most part, uncorrupted. If a person thinks they knows what vegan means, chances are they actually do.

I'm not trying to say you're wrong for calling yourself something other than vegan, I guess I'm just trying to convince you that calling yourself vegan would be all right, too. There is a vegan movement out there that's as ethically consistent as it can be. The same can't be said of ethical vegetarianism (and that's not meant as a slight to you, it's just a fact). If we're trying to be the most effective, then I think we should use the word vegan (a word more and more people are becoming familiar with) and be the most positive examples of vegans that we can be. Part of the reason "vegan" has negative connotations is that smart people like you refuse to call yourself vegan!

And that's meant as a compliment.

Al, thank you for your feedback!

I am familiar with and a fan of Gary Francione.

I appreciate what you wrote and have been thinking a lot about it. Even after I wrote that post yesterday I really started asking myself what it is about using the word "vegan" to describe myself that scares me so much. I really think it comes down to the negativity that I always find associated with it. It's a word that seems to scare people and they automatically think you are some crazy extremist. Not that I believe that, but just watching how others react has brought me to this thinking.

I also think it could be just the fact that I've been calling myself an ethical vegetarian for so long that it feels strange to switch from that.

But you (and others that have contacted me as well) make some very good points. I'm going to seriously think it over and you never know, I may decide it is time to start calling myself a vegan...