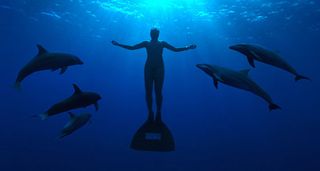 movie about it wins an Oscar award. The documentary "The Cove," which I recently reviewed here, has won an Oscar for the best documentary of the year, even beating out Food, Inc. (reviewed here).

Kudos to those who put themselves out there to make "The Cove." They certainly stood up for what they believe and took a chance to expose such cruelty to animals. And their efforts to educate the public and help dolphins have certainly paid off. Not only with winning the award, but they will also have a new television series on the issue that will be on Animal Planet (read about it here).

Check out the video here of them winning the award (an animal rights movie winning an Oscar actually brought tears to my eyes):

You can sign up for updates on saving the dolphins in Japan, by visiting the group site here.

An amazing triumph! Can't wait to see it!

Yes, you have to see it! And it is such a victory. I had tears in my eyes when they won the award.