Alligator Heads, Shark in a Bottle, and Seashells - Cruel "Souvenirs"

Yesterday I stopped in a souvenir shop in Daytona Beach. I was looking for mesh 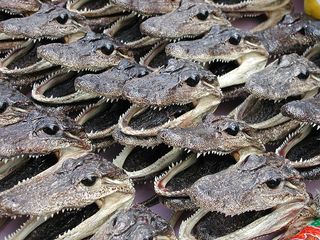 beachcombing bags for our upcoming Sanibel Island trip. We have one, for collecting the many wonderful seashells off the beach, but this year the kids want their own and I'm happy to oblige.

The first floor of this souvenir shop sold typical touristy type clothing. Lots of swimwear, t-shirts and the like. I went to the second floor and wasn't too happy. I left (not buying anything) calling it the floor of death. What did they sell?

Alligator heads - how sad is it that humans have actualy killed baby alligators (keep in mind that alligators under four foot pose not threat to humans) and they are selling the heads of them in gift shops? Absolutely cruel, wrong and disgusting to do to any alligators, baby or not.

Seashells - never purchase seashells in gift shops or by the bag from other sources. The animals that lived in those seashells were killed in order for them to sell them in bulk like that. I am a huge seashell collector (my one friend actually says I'm obsessed with them), but I want no part of killing the animal to take its shell. The seashells I have are all naturally found on the beach and only after the animal is no longer occupying them. Most people do not realize that these beautiful shells in stores (including department stores) have been killed. They were not found naturally after the animal passed. They are often used as adornments on frames, crafts, sold by the bag, individually, etc. They should all be avoided. If you love shells, like I do, find them naturally and only after the animal is no longer occupying them (by the way, Sanibel Island is one of the best places in Florida to do just that!).

And it doesn't stop there. While this gift shop didn't have them, I have seen others in the area selling baby turtles and hermit crabs. Buyer beware, there is a lot of cruelty involved in many of the souvenir gift shops. I for one do not want an animal to give up its life so that I can have a souvenir. And I hope you will agree.