Have you ever noticed that whenever you see an article about vegetarianism or veganism in mainstream media it always comes with the "well planned" disclaimer? They always say that according to XYZ, a vegetarian or vegan diet can be healthy if they are "well planned."

The "well planned" diet disclaimer attached to all vegetarian diets is a bit ridiculous. But what gets me the most is that an omnivore's diet never comes with that disclaimer. No, if you eat meat you never have to have a well planned diet in order to be healthy. Or at least that's the way it appears, since only vegetarian diets get the label.

Personally I think the label should be the other way around. Those who eat meat should be told over and over that if they want to be healthy they should be engaging in a well-planned meat eating diet. Instead, they are told to just turn to drugs to fix any health issues. Case in point: statins, which are cholesterol lowering drugs.

We all know that cholesterol comes from animal products and those that gorge on flesh tend to have inflated rates. The solution would be to cut back on or eliminate eating meat, right?

Not quite. Instead, drug manufacturer's create medications to combat the problem. 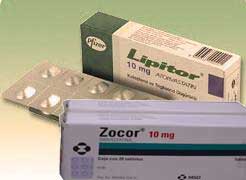 That way people can keep eating their not-so-well-planned omnivore diet and just lower it with the use of a statin. In 2004 alone, there was $15.5 billion in statin sales, and they continue to climb.

Then there are recent articles like this one, that states the "best" way to cut cardiovascular deaths is long-term statin use. Really? It's not having a well-planned diet and engaging in exercise?

As long as I see ominivores walking around stuffing their face with fast food combo meals, sucking down cholesterol-laden dishes, and lining up for medical intervention, I won't be convinced that it is us vegetarians and vegans that need the "well planned" diets.

I love it! It's so true! My friend is many tens of pounds overweight and she wants desperately to lose weight, but she refuses to change her diet of meat. Here I stand in front of her, 40 lbs less than I was when I ate meat and she cannot make the connection. When I start to talk about the connection between healthful eating of whole foods and vegan options, she closes her ears and announces very clearly that she will not give up meat. So she'll continue to take medication and wait for a diagnosis of diabetes and then will she reconsider? I doubt it. (okay, vent over)

Buy her a copy of The China Study! :)

I totally agree with you. When I first made the decision to be vegan, one of my colleagues (an omnivore) tried to tell me how difficult it is and how I need to spend at least a few hours writing out what I was going to eat to make sure I got all of my nutrients. I tried to explain to him that it's not that complicated. Meat eaters don't spend time planning to make sure they get adequate vitamins, minerals and antioxidants. Why are they so worried about my healthy diet? Sorry for the rant...

I totally agree, Michelle! Omnivore's never "well plan" their diets. But they always worry about vegetarians doing it. It's just crazy! As if we must have animal products to survive and be healthy or we will have to map out our eating... sheesh! :)