"The Kind Diet" is a book by actress Alicia Silverstone. The book gives you a look at 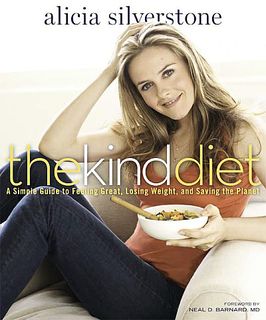 her vegan journey and offers tips and advice on starting your own. If you are looking for a vegan book focusing more on nutrition, than say factory farms, this would be a good choice.

While the book does touch on environmental and ethical aspects, it is largely focused on health and wellness. The book actually reminded me a bit of Christina Pirello's "This Crazy Vegan Life."

I liked the fact that she touched on our bodies not being designed to eat animals, that $190 million was spent on making the "got milk?" ads, and the addictive properties of casein. It was also interesting that she mentioned the great soy debate.

Half of the book is a vegan cookbook, and many of the recipes sound good, including the rustic pasta, pecan-crusted seitan, crispy tofu slices with orange dipping sauce, and cornbread.

There is one thing in this book that I do not like, which is when she covers handling temptation in your veganism. Her answer to being tempted to eat non-vegan food is to occassionally have bites and then deal with the guilt. She states that, if after eating her vegan food she is still tempted by her friend's non-vegan food:

"...if I'm still tempted by the fish, I nick a piece of sushi off a friend's plate right at the end of the meal... I just have to scratch that itch. I wrestle with guilt about eating a fishy friend, but that's my way of living in a sushi world. I hope my strategy works for you, too."

Strange advice, considering the title of the book is about being kind. Her advice on dealing with non-vegan temptation didnt' sit well with me. If you are a vegan for your own personal health reasons her advice may work. But if you are a vegan for animal rights or ethical reasons, it does not. We don't abandon our ethics in order to "scratch that itch." Furthermore, the more you do what she is suggesting, the more I believe there will be an itch. The longer you go without eating animal products, the less you ever crave them. Besides, doing this helps perpetuate the confusion that people often have regarding what vegetarians/vegans eat and who will overlook what in their food.

My advice would be to avoid temptation. It will go away after you have been away from animal products for a while. The title suggests this is a book based on ethical veganism, yet what comes through for the most part is that more of being based on a health aspect.

The bottom line, for me, is that this book is worth reading if you are interested in the health aspects of veganism or macrobiotics. But you may want to first check it out of the library, as I did, to make sure you will get future use out of it after you read it through once.