The Cattle In America

There are over 305 million people in America. In comparison, there are 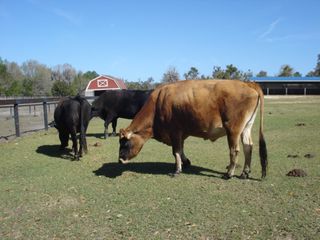 around 95 million cattle. To drive around here in Central Florida you would think that there are so many free-roaming cows and bulls. After a while it starts to look like the idea of the factory farm is just something you read about in books.

But what we have to remember is that as we drive past a field of cows, there are maybe 10-20 of them roaming in that group. Even if you passed four such groups in a day, you will probably come by 100 cows that are free-range, able to feel the sun on their backs and eating the grass their bodies were intended to eat.

The cows you see on free-range grassy fields are a drop in the bucket. A small drop. Even if you see 100 in a day... still, there are around 95 million in the country. About half of the "beef" in this country comes from factory farming. Cows used for dairy are usually kept in factory settings. Many more come from over-crowded land conditions, which consist of massive feedlots with tens of thousands of cows on them (those I've seen traveling across the country).

Granted, the cows have it good here in Central Florida. They look content, walking around eating the green grass, feeling the warmth and sun on their backs. Socializing with their fellow cows and babies. But in the end, they will sadly still end up on the end of someone's fork. As the jacket on one of the bikers attending Bike Week.

Until people can learn to have more compassion for cows, I'll have to be content driving by, saying hi and apologizing to them for all that my fellow man plan to do to them.

Check out this video of a cattle feedlot (notice the lack of space and grass):