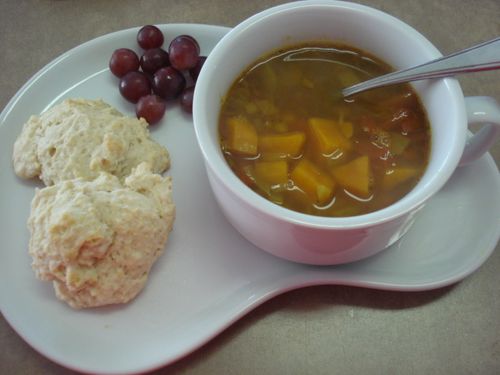 Tonight for dinner I made the "sweet potato lentil stew" from Alicia Silverstone's book "The Kind Diet." Along with it, I tried the recipe for drop biscuits from "1,000 Vegan Recipes" by Robin Robertson.

The stew was easy to prepare and had the house smelling great with all the different spices that go into it. We all really liked the taste a lot, including the kids. Very good stew that tastes healthy as well. This was the second recipe I've made from Alicia's book and so far I'm two for two, because we've liked them both (the otehr one was the barley casserole).

I had wanted to prepare the vegan cornbread recipe with it, from Robin's book. But when I went to reach for the corn meal I realized I was out. I really wanted to serve a bread with the stew, so I flipped some pages and found the simple recipe for "drop biscuits."

They were easy to make and oh so tasty! While they look a little on the rough side, they have a great taste and texture inside. I am sure we will be making them again. My daughter especially loved them.

Yet another tasty dinner, thank you to wonderful vegan cookbooks that have such great recipes.