Red Snapper Gets a Break, and Other Fishy News 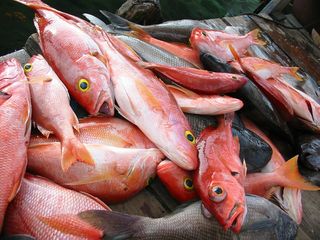 debate over the last year in regard to red snapper fishing. Conservation groups were calling for a ban on red snapper fishing, citing over-fishing of the species, while those who fish it were crying about the possible money they would lose with a ban.

Well, there has been a victory for the red snapper! The ban on fishing red snapper has been passed in Florida, Georgia and the Carolinas. This is good news, as the red snapper will get a much-needed break! You can read more about this temporary ban here. This was an issue that I had a couple of letters to the editor published in support of the ban, so I am pleased with this news.

In other fishy news, a giant tuna has reeled in a cool $177,000 in an Japanese auction. With just one fish fetching that much money, it's easy to see why people continue to empty the oceans. You can read more about it and see the tuna. It would be interesting to know how many other fish and sea creatures were killed in order to cash in on that one (there is so much bycatch! You can learn more about bycatch here).

You can learn more about over-fishing by checking out the Pew Environment Group, where you can sign up to get updates and get involved.