Just over a year ago I became friends with an Indian woman and her family. Since our meeting, we have gotten together most weeks for our kids to play, chat, walk, or just go to the movies. But something else has happened as well. She has opened up my culinary horizons and has gotten me excited about Indian food.

I know about India, the high rate of vegetarianism, Gandhi, nonviolence, etc., but had never been exposed to their food. Growing up it was never mentioned and I don't think anyone in my family eats it.

Since meeting my new friend, I've had the opportunity to try wonderful vegan Indian food a couple of times per month (the other weeks I share my vegan dishes with her).

I wish it hadn't taken me so many years before being exposed to Indian cuisine. It's wonderful! I've tried many dishes over the last year or so and have come to love Indian food (actually, I loved it right from the first bite!). I thank her for not only being a friend, but introducing me to a whole new realm of food I was never exposed to before.

Now I'm excited about trying to make some Indian dishes. And I'm happy to report 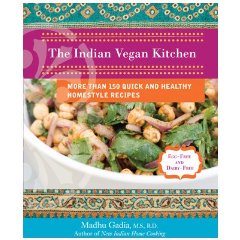 that today I got a new book that I ordered, called "The Indian Vegan Kitchen: More than 150 Quick and Healthy Homestyle Recipes" by Madhu Gadia. I've read through the book today and I'm impressed and excited to try the recipes.

I also found it interesting to read what the author wrote about vegetarianism in India, saying that it was the "norm" where she was from. She also discusses how they often incorporate dairy into their dishes, but many are vegan by nature, or can easily be made vegan.

Although I'm just getting started with this book, I do plan to post pictures and feedback of some of the dishes I make. If you haven't tried Indian food, do yourself a favor and give it a shot. You have nothing to lose and a whole new culinary corner to gain!

I don't think I've ever noticed that you blog on Sundays, too. Good for you, even better for me! LOL.

I love Indian cuisine. We have an Indian fusion restaurant here in our tiny city of Belleville and while it is fusion, they have initiated in me a love of Indian food. I regularly make some type of Indian food here every week and I challenge myself to branch out with something new each time. I usually just download recipes off the internet, but I will look for this book at my library.

I blog on any days I get the urge to! I don't really have set days, just whenever something comes to me that I want to blog about.

I could probably find vegan Indian recipes online as well, but I love vegan cookbooks and have a shelf full. So I needed one for my collection.