If you are not familiar with NHL hockey player Georges Laraque yet, it's time to get 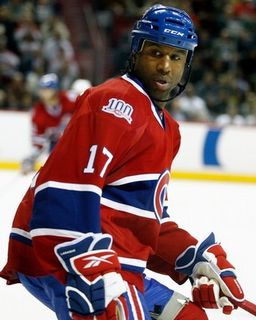 to know his name. After watching the movie Earthlings, he made animal rights a personal mission. He became vegan and recently did the narration for the French version of the film "Earthlings," called "Tierrens."

In addition, he has added an animal rights section to his personal Web site. He has participated in a fur protest and has become an outspoken person in the animal rights community.

This is great news! His repuation as a strong hockey player brings a powerful voice to the animal rights community, encourages other men to do the same, and gives many young sports fans a good vegan role model. Kudos to Georges!