Before getting a chance to read "Eating Animals" by Jonathan 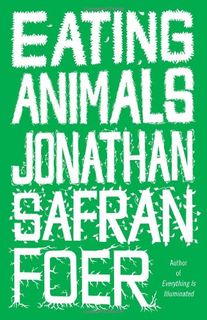 Safran Foer, I had heard a lot of buzz about it. Some love it, some hate it (including many vegans). One thing is for sure: A book about eating animals that gets this much media attention got my attention. It became something I felt I must read.

"Eating Animals" tells very vividly about the factory farm industry of today. The book is well researched and chock-full of statistics and information to back up the information. The book really aims to appeal to ones sense of reasoning.

Safran Foer has been quoted many times in the media saying that it is not a book about preaching vegetarianism or aiming to turn anyone vegetarian. I would agree to that, to some extent. The goal is more of one of animal welfare than animal rights. But, the logical conclusion one would come to after reading this book should be vegetarianism veganism. He goes about promoting vegetarianism in a clever way, so as to not immediately turn-off omnivores from reading it.

While he is advocating for eliminating the factory farms, he also explains that if that happened, people would not be able to continue to eat the quantities of meat they currently do, and at such cheap prices. He doesn't have to tell you to be vegetarian or vegan in the book, because the vast majority of readers' minds will likely be seriously considering it well before they they hit the last page.

Some of the things the author writes in this book are both deep and eye opening (and I've read my fair share of veg*n related books). The way he begins the book, with the case for eating dogs is absolutely brilliant, considering we live in a society that places dogs on a pedestal and many other animals on plates.

I appreciated all the information he provided throughout, regarding slaughterhouses, what those on the other side of issue are thinking, all the facts, and his first-hand account of what it was like to visit places, as well as his own vegetarian journey.

Some of the things he has written will no doubt adorn the pages of "famous quotes" someday, because they are that powerful, such as:

"How much suffering will you tolerate for your food?"
"In the case of animal slaughter, to throw your hands in the air is to wrap your fingers around a knife."
"What did you do when you learned the truth about eating animals?"
"One of the greatest opportunities to live our values - or betray them - lies in the food we put on our plates."

"Eating Animals" is brilliant, compassionate and moving. While my allegiance is that of focusing on animal rights, rather than animal welfare, I can deeply appreciate his message. This book should be required reading for anyone who eats meat (as well as those who don't).

While I checked this book out of the library, much to the outspoken disappointment of the librarian waiting on me, it is one that I will be purchasing. I took notes, plan to go back and highlight favorite areas, and this book will become a part of my collection. I have a feeling I'll be referring back to it (and trying to lend it out), often.

I will definitely request this book at my local library.

I have added three books to my personal library in the past year: Food Revolution by John Robbins, Eat to Live by Dr. Joel Fuhrman, and The China Study by T. Colin Campbell. The year before that I purchased Six Arguments for a Greener Diet by CSPI. Just this year (2010) I have ordered Fast Food Nation by Eric Schlosser (after watching Food, Inc.), The Face On Your Plate by Jeffrey Masson, Chew On This: Everything You Don't Want to Know About Fast Food by Eric Schlosser, The Omnivore's Dilemma For Kids by Michael Pollan, and That's Why We Don't Eat Animals: A Book About Vegans, Vegetarians, and All Living Things by Ruby Roth.

I love adding books to my personal collection because I can bookmark pages and lend them out to friends and family.

That's where I usually start- by getting the books at the library. Then if I really like them, I purchase. I also have own some of the books you listed and have read some from the library. My site has a review of "The Face on Your Plate" (you can search for it in my search box at the top right). I'm a book lover as well, Vibeke! :-)