Have you tried Primal Strips yet? We bought a couple and tried them again over the weekend. They are a vegan meat alternative snack (jerky) and they come in a variety of flavors, such as Thai Peanut, Teriyaki, Texas BBQ, and Hickory Smoked. This was the second time we have tried them.

What I like about the strips is that they have a good taste and texture. They really taste good and provide a protein snack that is especially perfect for when you are hiking. Even the kids really liked them a lot. I also like that the plastic packaging they come in states that it is biodegradable. Plus, they are non-gmo.

The part I don't like about them is twofold. First, is the price. At $1.29 for what is actually a few bites of food, I find it expensive. I don't know what the cost is in comparison to meat jerky, but I still think they are overly priced for the amount that you get.

Second, I would prefer that they were made in America, rather than Taiwan. Those little strips are traveling around 7,000 miles to reach America. Not only is it bad on the environment, but it also likely accounts for some of the higher cost, which has been added on to pay for all that fuel. If they were made in America it would be producing less pollution to reach stores and the price would likely be lower as a result. 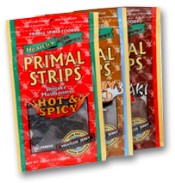 We buy these for our quake survival kit, but not for daily use. I agree that it is too expensive, otherwise.

Hanna, great idea! I will have to think about getting a few for when we stock up for the next hurricane season.