When you dine out as a vegetarian or vegan, it is a bit of a challenge if you don't go to an all veg restaurant. While I have been vegetarian for over 14 years, I have three restaurant instances that stand out as being my absolute worst dining out experiences.

1. A restaurant in the El Cortez, located in Las Vegas. It has probably been 10 years and I do not remember the name of the specific restaurant, or if it is even still open today, but it was a sit down American-style restaurant at that hotel. We were invited to dine there by relatives who were in town, that we hadn't seen in years. They had no vegetarian food on the menu, not even a salad. So we spoke with the waitress and asked if they could simply make us a salad. What restaurant does not have that stuff on hand? She was not happy that we made such a request and said they would see what they could do. When she brought out our meal, it was a bowl with 4 sheets of iceberg lettuce (not even cut up, just torn off the head of lettuce and laid in the bowl, still stuck together). On top of it was some white "dressing" that seemed more like warm dish soap. That was it! Needless to say we ate none of it and left hungry.

2. My second worst vegetarian dining out experience came at the Hungry Heron restaurant, located in beautiful Sanibel Island, Florida. Last year while visiting the island, I ordered the Fresh Vegetable Penne after discussing it with the waitress and feeling confident it was a vegan dish. She set the food down in front of me and I almost immediately threw up. There was a horrible smell that I assumed was some sort of clam/seafood sauce (I have never tasted clam/seafood sauce, but it smelled like that type of thing). I couldn't eat one bite of the food. I was literally gagging from the smell and had to push it away. She came back and took the dish away, but never addressed what was causing the smell. It was taken off the bill, but I couldn't bring myself to order anything else there. My stomach was turning. Yet another restaurant I left as hungry on the way out as I was on the way in.

3. My third experience came last night, at Maria Bonita's in South Daytona Beach, which is a restaurant I have dined at many times and have never had a problem. The people I was with were great (a holiday gathering), but the food was another experience. The waiter took the order from the other end of the long table. I placed my order for a vegetarian chimichanga (which is on the menu), but explained that I wanted it without any cheese or sour cream. The waiter made a big deal out of it in front of the group (making me uncomfortable). He then proceeded to tell us all that his sister "tried" to be a vegan once, although she still ate seafood (sigh). Then he explained that they snuck meat into her food and told her about it after she ate it. He then joked about putting steak on my food. He made such a big deal out of it all that when my food arrived I didn't feel comfortable eating. I felt like he may have had meat put into it, and when I examined the inside there seemed to be some very small pieces of something that was not of a vegetable matter. However, it was evening and the lights were dimmed, so I could not tell for sure. I didn't eat the food. He took my plate and never questioned why I hadn't eaten it. I ended up paying $14 for chips, salsa and water (yet those items are free!).

The point here is that we all have some bad dining experiences, especially if we are vegetarian or vegan. Today my husband and I look back on some of these and laugh, although they aren't funny when they happen. Restaurants should take notice, because each incident has made them lose a customer. What's been your worst dining out experience as a vegetarian? 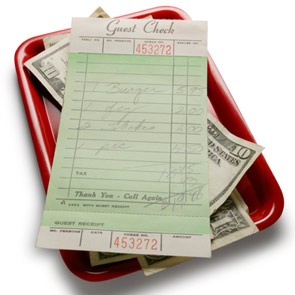 The only time anyone's ever "joked" about sneaking meat into my food is when with family. If a waiter at a restaurant did that, I'd raise a ruckus. I already feel uncomfortable enough at times about being picky but that waiter needs a lesson! Gracious :(

Jessica, I agree! It was a very uncomfortable situation. Thanks for your feedback!