Many people are not aware that pearls involve animal cruelty, but they do. Jewelry stores could not make much money relying upon finding pearls naturally out in the water. So they control the process and force the mollusks to create pearls. To understand how the pearl industry harms life it is important to understand how a pearl is created.

According to Wikipedia: Pearls are formed inside the shell of certain mollusks: as a defense mechanism to a potentially threatening irritant such as a parasite inside its shell, the mollusk creates a pearl to seal off the irritation.

Pearls usually come from oyster farms, where the mollusks are purposely harrassed in an effort to get them to produce pearls. They have been around for many years and now they have expanded the market. In a recent news story, it was announced that researchers have found a way to make cultured pink pearls from the queen conch.

The researchers say their next move is "...launching a business that they hope will create tens of thousands of conch pearls -- and millions in revenue -- every year."

As for the fate of the queen conch, they will be irritated, made to produce for humans, and then when they can produce no more, they will be eaten as fritters or in stew. Then their shells will likely be sent to gift shops, where ignorant tourists will buy them up to take home.

The queen conch are amazingly beautiful and unique animals. They have also been over-fished and their numbers have depleted.

According to an article on the topic by Science Daily, they state:

Survival of the animal is critical because commercial fishing has depleted the once-abundant wild populations of queen conch, and they are now considered a commercially threatened species in Florida and throughout the Caribbean.

Making the queen conch produce pearls for people (along with eating them) is unethical, as are all pearls. You can help by spreading the message about pearls and why people should avoid them. Also, avoid purchasing any seashells in gift shops. In almost all cases, the animals have been killed so the shells can be sold.

If you want to collect seashells, always find them naturally on the beach, after the animal has already died. Never kill the animal to take its shell (which is also illegal in many places). 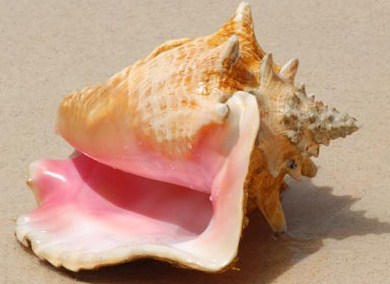