People often wonder how I became a compassionate person toward animals, considering I was not raised a vegetarian. As a child I was raised the same way that 97 percent of the American population was - eating the Standard American Diet (S.A.D.). I wasn't taught to think of animals as more than a source of food for humans. Yet I became an adult who has chosen to live a life of being an ethical vegetarian and raise my children the same.

One of the things that helped form my views was deer hunting season. Growing up in Northern Michigan it was, and still is, a big part of life there. I still have the images of "buck poles" in my head. Without a doubt, I know that seeing those deer hang there by their necks, with their beautiful life taken from them, made me feel sad. Seeing buck poles was a normal thing during hunting season where I grew up. If you are not familiar with what a buck pole is, it is a pole where hunters hang the deer they kill as it waits to be processed or taken home (see the picture below). The buck pole wasn't the only place I would see these poor deer, mind you. I also saw them tied down on car roofs, trunks and just about any way someone could fathom to get them transported.

On other end of the spectrum, my mom used to take us to the local deer refuge, where we would get the opportunity to feed the gentle animals from the palm of my hand. This likely helped me make the connection.

I bring this up because rifle season is now open in places like Michigan. And my Facebook page is active with people bragging about what they or someone they know has "bagged" already.

Let me first say that I don't hate hunters. My brothers-in-law are hunters and one has killed several deer this year. They have been like brothers to me since I was kid. But they know how I feel about the hunting and we leave it at that. Besides, I actually find hunters to be much more honest in their meat-lust than other omnivores who pay people to do the slaughtering. Still, I am not a fan of hunting season. No surprise here, right?

There are several reasons why, let me share them with you:

1. Deer are wonderful and peaceful animals that have feelings and do not want to be hung from a pole or eaten anymore than a dog does. It wants life, too. This past summer I spent some time in Northern Michigan visiting my mom and we loved watching the deer come in near her house in the evening. It was wonderful and I could never imagine causing those earthlings harm.

2. Hunters for many years have tried to justify the season by saying it is about population control. The rest of us realize that this is not true and it is a faulty theory. Regardless of the number of vehicle collisions with deer, it is because of human population growth and sprawl, not because deer population is out of control. Furthermore, the taking of bucks is limit in places, such as Upper Michigan, because the population of them has gotten so low (it would be limited in lower Michigan if it wouldn't make so many hunters mad), that they are trying to give them a chance to increase in numbers. Here is some interesting information about the facts surrounding hunting.

3. Some hunters say that many deer would not make it through the harsh winters, so in essence, they are doing it a favor by killing it. This is nonsense, because if it were true they would be trying to kill the old and weak deer, not the biggest bucks they can get. Besides, we don't use this mentality when it comes to treating our own elderly or sick individuals.

4. Many hunters claim that deer hunting (or any other type of hunting) is a sport. According to Merriam-Webster, sport means to amuse oneself. So in the true sense of the definition I would agree that for them, it is a sport. But can they not find something else to do to amuse themselves that does not involve taking another living, breathing animal's life? How about taking up nature photography, which will still give them a chance to shoot the deer - only they will shoot to frame by taking a picture. Or how about taking up hiking or camping, which will also get them out in nature, but appreciating it, rather than helping to destroy it?

5. Hunting of all forms in America is about one thing and it's not population control. It is, as the saying goes, the root of all evil. Hunting in America is about money. In a report titled Economic Importance of Hunting in America, put out by the International Association of Fish and Wildlife Agencies, hunting in America generates $25 billion in retail sales and $17 billion in salaries and wages. Furthermore, they state that on average, each hunter spends nearly $1,900 per year on hunting (proving they are not hunting for a cheap way to get food). When it comes to the top hunting states, Texas takes first place, while my native Michigan comes in at number seven, racking up $671,670,664 annually in hunting-related retail sales, according to the report.

6. There is no challenge in killing an animal. Not when you are dressed in a disguise, hiding in a blind, and have likely baited it in, earning its trust. Anyone can kill an animal (or choose not to), especially one that has not had an opportunity to defend itself. It's more like the deer is being sucker punched by the hunter... then comes the pictures of the proud hunter holding what he "caught."

7. Most hunters brag about their successes. I find it a bit strange and sad to brag about killing animals, regardless of what type of animal it was. A life was taken. You don't know what type of social life it had, which may have left a fawn without its father, a doe without her protecting mate, or a herd short one of their own. No matter what type of life it lived, it being killed should not be celebrated. Again, I ask how can we live in a nation that condemns Michael Vick for dog fighting and allows others to brag about killing deer? They are both animals. Why is it okay to abuse or kill one and not the other?

The almighty buck pole is one of many things that lead me to my current views on animal rights. And while many people I know and love will continue to head out into the woods and try to end the life of deer this year, I will tell them the same thing I tell my dear brothers-in-law each year - I wish you unluck! I'm rooting for the deer, because I want them to have a chance to live their life, just like you are doing yours.

I leave you with the famous words of Leonardo Da Vinci: "The time will come when men such as I will look up on the murder of animals as they now look upon the murder of men." 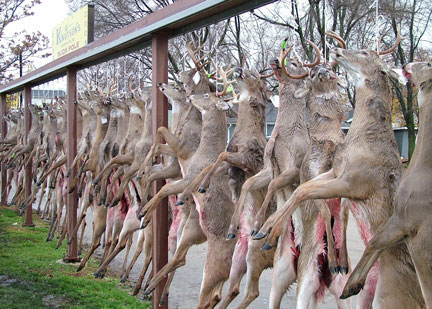 (A typical buck pole. Do a search online and you will find many more.) 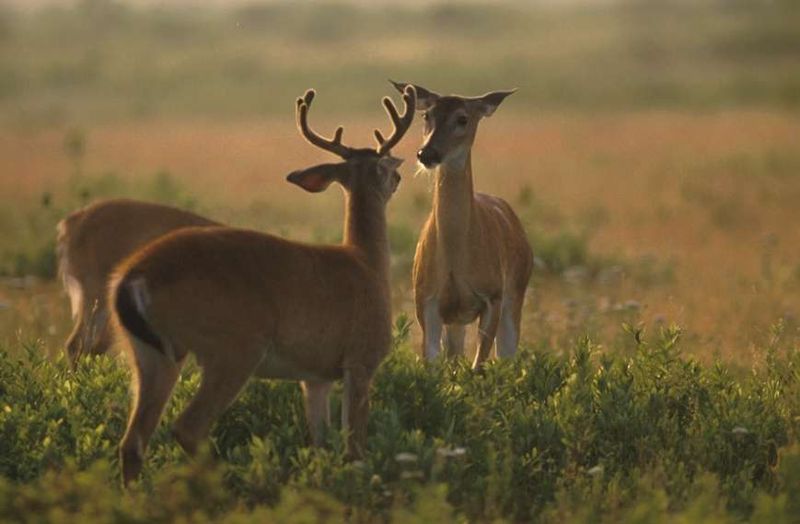 (The way I prefer to see deer. Beautiful, alive, a part of nature.)